Waiving PAYGO on $1.9T ‘Stimulus’ Is Reckless. There Are Better Ways to Go. 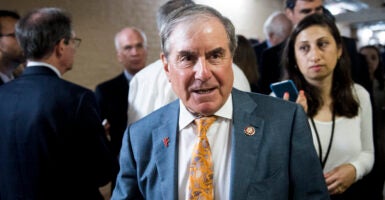 President Joe Biden’s $1.9 trillion “American Rescue Plan” was passed under the guise of responding to COVID-19. In reality, less than 10% of the bill was for public health.

The massive “stimulus” package was stuffed with partisan special-interest payoffs for liberal priorities and other wasteful spending.

Significantly, the law will spend nearly $1.9 trillion without a plan to pay for it. That means that, unless Congress passes new laws with equal or greater reductions in spending by the end of the year, statutory pay-as-you-go (aka “PAYGO”) enforcement will kick in.

The basic premise of statutory PAYGO is straightforward. In the words of former President Barack Obama, who championed the policy and signed it into law, it tells Congress: “You can’t spend a dollar unless you cut a dollar elsewhere.”

If, over the course of a year, laws are enacted that are projected to increase the deficit, statutory PAYGO requires that deficit increase to be paid for by automatic spending reductions (known as sequestration) over the next several years.

However, most spending accounts and programs are exempt from sequestration.

The law has fairly significant flaws, and it would be better to replace it with a more robust fiscal rule that more effectively restrains excessive spending. Politicians of both parties have abused loopholes, adding higher spending without paying for it.

The Congressional Budget Office estimated that because of the large amount of spending in the stimulus law, statutory PAYGO would require a sequestration order to reduce spending by $381 billion next January.

That actually exceeds the total amount of the spending accounts that are subject to sequestration because most major programs are exempted or are capped.

Now that Democrats have enacted their $1.9 trillion spending binge, they do not want to pay for it.

Rep. John Yarmuth, D-Ky., chairman of the House Budget Committee, has introduced a bill that would declare that the stimulus bill “shall not be counted” on the PAYGO scorecard. In effect, it would attempt to pretend that the deficit-financed spending spree for special interests never occurred.

The bill is pitched as a “legislative fix to avert sequestration.” It isn’t a “fix.” It is fiscal recklessness.

Yarmuth said, “If Republicans play political games and don’t do their jobs, Medicare and the seniors that depend on it will pay the price.”

Of course, nothing could be further from the truth.

The CBO estimates that the sequestration order could reduce total Medicare payments to providers and insurance companies by just 4% of the $943 billion that will be spent on Medicare next year.

Not a single Republican voted for the stimulus. The limited reductions in Medicare spending as a result of the Democrats’ overspending would be enforced by the terms of Obama’s statutory PAYGO law and carried out by Biden’s director of the Office of Management and Budget.

Members of Congress who voted against the irresponsible $1.9 trillion spending bill should not feel pressured to excuse that fiscal recklessness by voting to waive statutory PAYGO enforcement. Simply waiving it retroactively would be just as irresponsible as the spending bill itself.

The potential of sequestration does, however, present an opportunity to implement much-needed fiscal responsibility in a more thoughtful way.

There are a number of smart policy alternatives to achieve spending reductions of equal or greater amounts of savings over time than would the blunt instrument of a sequestration order:

It’s vital that policymakers start to turn the tide against overspending. Even before the outbreak of COVID-19, the federal budget was on an unsustainable path due to the growth of spending outpacing the growth of the economy.

The CBO’s “Long-Term Budget Outlook” shows that even though tax revenues are projected to rise above normal historical levels, spending will continue to grow out of control.

The national debt has skyrocketed to $28 trillion, about $225,000 per American household. The public debt is already at its highest level relative to the national economy since World War II, but unlike the postwar period when spending fell back to more normal levels, spending and debt are projected to only continue rising.

The CBO says that the current fiscal trajectory would “reduce business investment and slow the growth of economic output,” and would “increase the risk of a fiscal crisis.” But more important are the negative consequences of government that grow too large and burdensome for families and communities.

When the federal government grows beyond its proper limits, and spends and taxes too much, it stifles prosperity, infringes on liberty, and makes it more difficult to live the American dream.

Given all that is at stake, pretending the $1.9 trillion spending bill never happened and retroactively waiving statutory PAYGO enforcement would be beyond irresponsible. However, Congress can and should take advantage of the opportunity to implement thoughtful fiscal responsibility.