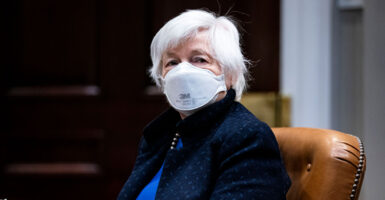 If states accept the latest round of federal bailouts, Treasury Secretary Janet Yellen (pictured) could later issue guidance on how the funds can be used, preventing governors from making state tax reforms. (Photo: Al Drago-Pool/Getty Images)

The Democrats’ COVID-19 spending bill, which would cost taxpayers nearly $2 trillion, includes $360 billion of new funds available for state and local governments, in addition to more than $170 billion for schools and colleges.

Governors should reject these federal bailouts because they will make cutting taxes harder and make growing the size and scope of government easier.

Not only that, but states simply do not need these funds. In 2020, 23 states experienced increases in revenue compared to 2019. Even The New York Times conceded that dire forecasts of plummeting revenue due to COVID-19 did not materialize. States have also received more than $360 billion in already authorized COVID-19 relief.

Not only is Congress sending deficit-financed federal taxpayer dollars to states that don’t need it, it attached some worrying strings.

The money is ostensibly intended for “responding to the public health emergency” or its economic impacts, supporting front-line workers, and making investments in water, sewer, or broadband.

But because Congress knows that states do not really need the money, it also included restrictions on the use of funds.

Some guardrails are good, such as not allowing the money to bail out state and local governments’ recklessly mismanaged and massively underfunded public pensions. But others are concerning, such as a provision that prohibits using the funds to “directly or indirectly offset a reduction in the net tax revenue” of the state.

Because the bill is poorly written, it fails to clearly define what “indirectly offset” would mean, as well as the scope of other denied activities. Therefore, the Treasury Department will likely issue guidance, coming up with its own interpretation of what states can and can’t do.

Could Treasury Secretary Janet Yellen take a broad reading of the provision and attempt to micromanage the finances of the states for years to come? This would surely be an overstep by the federal government, but it would not be the first time.

If the Treasury Department does indeed overstep its authority, the states who took the aid money would potentially be prevented from making any state tax reforms, which would allow  families to keep more of their own money. Such restrictions could last for years.

Suppose a state takes the new federal funds for a three-year-long rural broadband infrastructure project. In this case, the state could potentially be prohibited by the Treasury secretary from cutting taxes, providing tax rebates, or delaying planned tax increases until 2024 or later. The state’s fiscal independence could be stripped away.

No governor who wants to implement pro-growth policies to help spur the pandemic recovery should take the money. The strings attached are too costly.

Recent federal bailouts of state budgets—such as the round in the early 2000s and those following the Great Recession—provide clear examples.

In 2003, states got $20 billion in federal aid. But instead of this infusion acting as a temporary buffer to get states back in the black, state debts increased by 20%, total spending rose by 33%, and states shorted their pension contributions over the following four to five years.

Much of the $300 billion for state governments in the 2009 American Recovery and Reinvestment Act wasn’t used to bridge short-term gaps. Rather, it funded permanently expanded government programs.

For example, that legislation provided about $50 billion to stabilize education systems, but instead, many states used the funds to add entirely new staff positions, including many nonteaching ones.

About $90 billion that the American Recovery and Reinvestment Act allocated for Medicaid programs lasted through 2010. Yet, a majority of states built their 2011 budgets around the expectation of continued higher federal Medicaid funding, which ultimately had to return to previous levels.

The prospect of federal tax dollars creates a hard-to-resist incentive for state legislatures to expand existing programs beyond sustainable levels and simultaneously underfund those programs in hopes of further federal support.

When temporary federal money runs out, states have historically increased taxes permanently to make up the difference. Each dollar of federal grant money results in 40 cents of state and local tax increases.

If governors feel politically compelled to take the funds, as many did after the Great Recession (who can resist “free” money?), states will have to wait to see how the Treasury Department’s guidance interprets the rather narrowly defined, specifically authorized uses of funds.

It is possible that states will be allowed to use the funds for activities that don’t put future taxpayers on the hook for a permanently expanded budget. These uses are preferable to new state entitlements or new infrastructure projects.

If the Treasury Department allows it, states should use the funds to replenish unemployment trust funds to prevent tax increases on employers in the coming years. Filling depleted rainy-day funds and paying off bonded debt could also be good uses for the funds.

The best option is for state governors to avoid Washington-imposed restrictions by simply declining additional federal funds. The dangers of permanently expanded state budgets and the possibility of the Treasury Department’s micromanagement of states’ fiscal decisions outweigh the benefits.