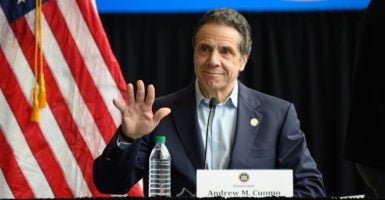 The National Governors Association recently asked Congress for a bailout of $500 billion in addition to the more than $200 billion included in the Coronavirus Aid, Relief, and Economic Security (CARES) Act.

The money sought by the governors would be “unrestricted,” meaning its use need not be tied directly to COVID-19, the disease caused by the new coronavirus.

The federal response to the COVID-19 pandemic already has been extraordinary.

Federal dollars primarily have been targeted at providing relief in the current crisis through direct assistance to individuals and businesses struggling from no fault of their own; Medicaid coverage for tests and vaccines; and more than $200 billion in direct support for states and localities for unforeseen coronavirus expenses.

In 2003, states got $20 billion in federal aid, but instead of this infusion acting as a temporary buffer to get states back in the black, state debts increased by 20%, total spending rose by 33%, and states shorted their pension contributions over the following four to five years.

Again, much of the $300 billion for state governments in the 2009 American Recovery and Reinvestment Act was used to permanently expand government programs instead of to bridge short-term gaps.

For example, that legislation provided about $50 billion to stabilize education systems, but instead many states used the funds to add entirely new staff positions, including many non-teaching ones.

The measure also included about $90 billion for Medicaid programs that lasted through 2010. Yet, a majority of states built their 2011 budgets around the expectation of continued higher federal Medicaid funding.

And crisis aid is rarely temporary. The federal share of state budgets increased 23% between 2000 and 2017.

The governors’ demand for an additional $500 billion of unrestricted federal money would set a dangerous precedent for even larger future bailouts, such as a $4 trillion to $6 trillion bailout of unfunded pension liabilities (more than two or three years’ worth of federal income tax revenue).

Unlike past economic downturns, the current economic contraction is purposeful and temporary, to address a global health pandemic.

Governors rightly have taken the lead on determining what shutdown and stay-at-home orders are best for their citizens, and they should be in charge of when to lift those restrictions.

But if states can tap federal revenues—really just a redistribution of costs from state taxpayers to federal taxpayers—their incentive will be to prolong COVID-19 restrictions unnecessarily and slow the economic recovery.

States and their governors have been central to the pandemic response, and their decisions should be made without the creation of new mandates or perverse incentives from Congress.

Instead of state and local bailouts, Congress should stay focused on a timely, temporary, and targeted response to the public health crisis.