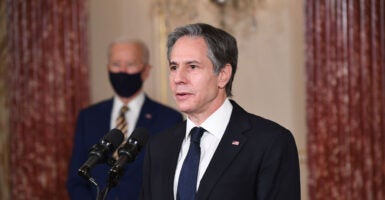 Secretary of State Antony Blinken (pictured) has announced that the U.S. will rejoin the U.N. Human Rights Council. He is pictured here speaking to staff at the State Department during the first visit of President Joe Biden on Feb. 4. (Photo: Saul Loeb/AFP/Getty Images)

The United States is headed back to the United Nations Human Rights Council, as announced by Secretary of State Antony Blinken. In his statement, Blinken addresses the body’s failings, but notes that, “the best way to improve the Council is to engage with it and its members in a principled fashion.”

While American human rights leadership is crucial, does the Biden administration have what it takes to substantially improve the beleaguered institution, and ameliorate the global status of human rights at large?

As the epicenter of the U.N.’s human rights efforts, the Human Rights Council is subject to frequent criticism, and will soon undergo a five-year reform process.

Blinken cites the need for “reform to its agenda, membership, and focus, including its disproportionate focus on Israel”—considerations not dissimilar to those identified by the Trump administration, culminating in the 2018 exit.

Contrary to the Trump disengagement, however, the current administration’s focus is on robust reengagement to correct these weaknesses—in addition to tackling the imbalances triggered by the absence of American leadership over the last two years.

The secretary of state may be correct in his assertion that “our withdrawal in June 2018 did nothing to encourage meaningful change, but instead created a vacuum of U.S. leadership, which countries with authoritarian agendas have used to their advantage.” But this is only half of the story.

True, many of the failings of the international human rights system derive from the influence granted to authoritarian states. That said, we cannot ignore the comparably detrimental, but far less recognized, impact of democratic countries that wield enormous, and often coercive, “progressive” clout on the Human Rights Council.

It is not enough for the U.S. to simply head back in—it must return with the purpose of countering these dual threats to human rights.

The presence on the council of certain governments clearly antagonistic to human rights indubitably threatens the credibility of the entire system. But, perhaps out of fear of likening them to their human rights-abusing counterparts, it is not often publicly noted that many progressive democracies, albeit with superior human rights records overall, have wreaked their fair share of havoc on the council as well.

In recent years, the growing trend has been for Western governments to attempt to force the developing world to accept norms that violate their national laws and cultures—for example, with regard to promoting abortion and diluting parental rights.

Over the years, the council has become so saturated with radical ideologies—driven largely by Western states and imposed on the developing world—that it risks losing its human rights credibility entirely. Herein lies the Biden administration’s blind spot.

If the U.S. joins the ranks of these progressive champions of faux rights—advancing issues such as the “right” to abortion or elimination of “hate speech”—its ability to play a real role in the revitalization of the international human rights system will be jeopardized.

Unfortunately, thus far, the Biden administration has not shown a willingness to put consensus-based efforts before divisive agendas. If, as expected, the administration brings this approach to the council as well, it is likely that we will see a further breakdown of human rights cooperation, rather than the renewal we so urgently need.

Promoting controversial agendas would only render the U.S. an aggressor, perceived to oppose the authentic needs of the developing world, and in no way fortify its chances of combating human rights abuses.

As violations of human rights across the world reach an all-time high, exacerbated by the COVID-19 climate, the need for concerted action from the U.N. has never been greater. It is through this lens that all eyes are on the Human Rights Council’s upcoming reform process.

Of urgent need are reforms that will address not only its more obvious shortcomings pertaining to human rights hypocrisy, but also the extremely detrimental politicization that threatens the sustainability of the international human rights project.

If the U.S. is to play a role in repairing the human rights system, it must stick to its commitment to authentic human rights, not ideological agendas.