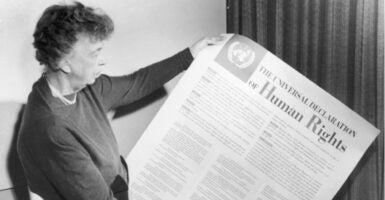 In this undated photo thought to be from 1947, former first lady Eleanor Roosevelt holds up a poster-sized copy of the Universal Declaration of Human Rights. (Photo: Fotosearch/Getty Images)

Human Rights Day is celebrated annually on Dec. 10 in recognition of the adoption of the Universal Declaration of Human Rights by the United Nations General Assembly in 1948.

The Universal Declaration of Human Rights has served as the foundation of the international human rights system for some seven decades, but it’s threatened by its very success, as activists use it to assert an ever-growing list of “rights” that undermine the inalienable rights and fundamental freedoms it was designed to promote and protect.

It recognized “the inherent dignity” and “the equal and inalienable rights of all members of the human family” as “the foundation of freedom, justice, and peace in the world.”

Forging consensus among the experts contributing to the drafting of the Universal Declaration of Human Rights was a singular achievement. Securing support for it among the world’s nations was a triumph.

Over the ensuing decades, however, the remarkable consensus has been challenged by a powerful new movement of sovereign and non-sovereign entities, including lawyers, academics, nongovernmental organizations, activists, and U.N. officials, who seek to “improve” on what was accomplished in 1948.

In order to meet perceived new challenges, this movement asserts new rights and new interpretations of legally recognized rights. As noted by Secretary of State Mike Pompeo, the original 30 rights in the declaration have proliferated into 1,377 rights provisions in 64 agreements.

This effort to promote the “evolution” of human rights threatens to undermine the great and noble project in fundamental ways.

These rights are often in tension—and sometimes in outright conflict. Unlike more traditional rights, which seek to protect the individual from infringements on their freedoms by government, new rights typically seek to guarantee benefits to individuals from governments or to assert rights to categories of people or to a specific community.

High-minded assertions of rights to broadband, a clean environment, or development cannot magically be realized. They require regulations, allocation of resources, and financial transfers by government.

Too often, enforcing new rights requires restrictions on the more traditional rights. For instance, calls for addressing “hate speech”—which advocates support as a means for combating what they see as intolerance and racism—nearly always involve restrictions, prohibitions, or punishments that infringe on the freedom of speech or freedom of religion and belief.

Confusion and controversy over what human rights mean diminish prospects for greater enforcement. Governments use the proliferation of rights to deflect from their violations by pointing to protection of other “rights.”

This long-standing problem dates back decades to communist countries asserting their fidelity to economic, social, and cultural rights—such as the right to a job or a right to health care—as a way to obscure their denial of civil and political rights, such as the right to self-government and freedom of speech.

Today, the problem continues at the U.N. Human Rights Council. Repressive states claim concern over human rights violations in other countries, while rarely being confronted over their hypocritical failure to admit their own problems or the human rights shortfalls of their allies.

Meanwhile, countries like the U.S. receive more criticism and recommendations on improving their human rights practices than Cuba, Iran, or Venezuela.

Accountability is further undermined by activists seeking to reinterpret the traditional definitions of rights and assert new rights not contemplated in the original negotiations.

We see this with claims that women’s rights cannot be realized without inclusion of a right to abortion. Bypassing the democratic process to impose new interpretations of existing rights is an assault on the very spirit of rights.

The State Department’s Commission on Unalienable Rights, made up of experts on the right and the left, acknowledged these problems in a report released last summer.

Many human rights activists strongly opposed the report because it recommended steps to slow their counterproductive efforts to expand the number and definition of rights.

Specifically, the commission recommended that policymakers carefully consider new rights claims, weighing how closely they are rooted in the rights laid out in the Universal Declaration of Human Rights; their consistency with U.S. constitutional principles and American traditions; whether the U.S. and other nations have formally given their sovereign consent to recognition of the claimed rights; whether there’s a clear consensus of support among the many cultures and traditions of the human family; and whether new rights can be integrated into the existing human rights rubric without harmful conflicts.

The commission’s recommendations were hardly radical. They merely call for due consideration of new rights claims, reflection on their potential impact, and democratic accountability. But prudence often involves modest steps, not the sweeping, rapid changes that activists increasingly demand.

Pompeo observed, “More rights does not necessarily mean more justice.” Indeed, the proliferation of ever more rights and the desire to advance all of them without preference has diffused efforts to advance the fundamental rights and freedoms essential to individual liberty.

Respect for and enforcement of universal human rights depend on a clear understanding of what human rights are, practical consensus around the legal norms that protect rights, and respect for the sovereignty of states that guarantee those rights.