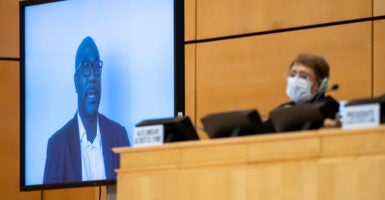 United Nations High Commissioner for Human Rights Michelle Bachelet, right, looks on next to a TV screen showing George Floyd's brother, Philonise Floyd, speaking via video message during an urgent debate on "systemic racism" in the United States and beyond at the Human Rights Council on June 17, 2020, in Geneva. (Photo: Martial Trezzini/Pool/AFP/Getty Images)

At the behest of all 54 African countries, the U.N. Human Rights Council held an “urgent debate” June 16 to discuss racism and police brutality, with a special focus on the U.S. Earlier, the head of the African Union, Moussa Faki, publicly condemned George Floyd’s killing.

Floyd’s killing was vile, and African countries are justified to criticize it. But the selective outrage of singling out the U.S. for special scrutiny—the urgent debate at the U.N. Human Rights Council was only the fifth of its kind in 14 years—demonstrates either a moral blind spot or extreme cynicism.

The African states calling for the extraordinary measure should have first reflected on how poorly African governments can treat Africans.

Hereditary slavery still exists in Mali, Mauritania, and Niger. People smugglers in Libya auction off black Africans. Fourteen of the 18 countries the Global Slavery Index ranks as worst in the world at fighting slavery are African.

Child marriage, which the International Labor Organization considers a form of slavery when forced, as it frequently is, is “entrenched” in parts of sub-Saharan Africa.

Minorities often fare very poorly in Africa. People from pygmy tribes are frequently treated as sub-human, and many have been driven from their ancestral lands.

The Somali Bantu, a tribe of dark-skinned people racially distinct from the majority of Somalis, are common prey for the large Somali clans who often still refer to them as “slaves,” invoking Somali Bantus’ traditional role in Somali society.

Many of the African countries have notoriously brutal law enforcement. Security services in Kenya, Nigeria, and South Africa have so far killed at least 15, 18, and 12 people, respectively, while enforcing COVID-19-related lockdowns. (South Africa’s president ascribed the killings of his people to police “let[ting] their enthusiasm get the better of them.”)

For context, that means the security forces of each of those countries killed more people in a few weeks than American police killed unarmed African Americans in all of 2019.

The African Union, for its part, often fails to vigorously denounce member countries that unleash mass murder against their own people. One Ugandan wit observed that “[the African Union’s] silence to killings by African security organs is in good faith. They care so much that such news sends them into speechlessness.”

The African Union also, along with many African leaders, whitewashes some of the world’s worst abusers. Seventeen African countries signed an open letter defending China’s internment of between one and two million ethnic and religious minorities in Xinjiang, and none have condemned the practice.

Focusing on the practices of countries like the U.S. at the behest of states with far worse records is par for the course in the Human Rights Council. Since its founding in 2006, the council has been a profoundly political body. It exhibits extraordinary bias against Israel, with nearly half of the condemnatory resolutions passed by the council focused on that country.

It has never passed a condemnatory resolution on China, Cuba, Russia, or Saudi Arabia, despite their terrible records on religious persecution, punishment of political dissent, hostility to freedom of the press, and unequal rights for women, respectively.

Currently, 11 of the 47 members of the council (including Afghanistan, Eritrea, Qatar, Libya, and Venezuela) are ranked “not free” by Freedom House. China isn’t currently on the Human Rights Council, but only because of term limits. It almost certainly will win reelection next year.

Nobody is proposing that the U.S. is perfect or should be immune from criticism—least of all Americans themselves who have spent weeks grieving, protesting, and reflecting on the history of our country following the death of Floyd.

A credible council must be able and willing to examine the human rights practices of each nation. But the council routinely fails to hold the world’s worst human rights abusers to account.

African nations are complicit in this selective approach to human rights. The outcome of the urgent debate is tainted by the failure of African governments to hold themselves and each other to the standard that they seemingly expect of the U.S.