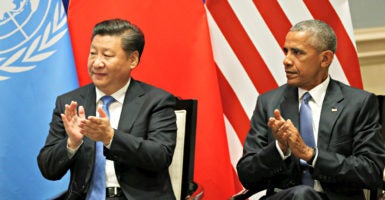 During President Barack Obama’s final days in office, administration officials ran through over $700 million in a spending binge designed to fund U.N.-related priorities that lacked support in the Republican-controlled Congress and, likely, the incoming Trump administration.

Members of Congress expressed legitimate outrage about this political gifting. But Congress should be more proactive in taking action beforehand to prevent spending it opposes.

Last week, while everyone was anticipating the inaugural ceremony for new President Donald Trump, Obama administration officials were:

Providing $500 million to the United Nations Green Climate Fund. Three days before Trump assumed office, the State Department sent half a billion dollars to the U.N. Green Climate Fund. This was the second such payment made by the Obama administration—it also sent $500 million in March 2016—to fulfill the president’s pledge to provide $3 billion to the fund. The Obama administration made these payments despite the fact that Congress never specifically authorized it and many members were outraged over the initial payment.

Providing $221 million to the Palestinian Authority. Obama administration officials notified Congress of this expenditure Jan. 20, just hours before Trump’s swearing-in. This was done despite the fact that Reps. Ed Royce, R-Calif., chairman of the House Foreign Affairs Committee; and Kay Granger, R-Texas, outgoing chairwoman of the House Appropriations subcommittee on State, Foreign Operations, and Related Programs; both had placed holds on the $221 million. Royce and Granger pointed to concerns about Palestinian attempts to advance unilateral claims of statehood by joining international organizations as a member state prior to a negotiated peace with Israel.

Members of Congress criticized all of these actions. They have a point. Under the Constitution, Congress has the power of the purse. In other words, only the legislative branch has the power to tax and spend funds raised.

In each case above, Obama defied the intent or express wishes of Congress that traditionally have been respected.

Obama was, however, able to proceed anyway because Congress never specifically passed legislation prohibiting him from doing so. As noted by the Associated Press, “Congressional holds are generally respected by the executive branch but are not legally binding after funds have been allocated.”

Even after the first $500 million payment to the U.N. Green Climate Fund, Congress did not prohibit use of the Economic Support Fund for this purpose. Nor, despite repeated practice, did Congress pass legislation to require the administration to instruct the U.N. to pay all credits owed to the U.S. Treasury.

The Obama administration was particularly brazen, but one would have to be naïve to believe that any administration would refrain from using available authority and discretion to fulfill its policy priorities.

Under America’s system of government, Congress is one of three co-equal branches of government. If it wishes to reclaim this status, it needs to assert itself.

Instead of expressing outrage after the fact, Congress would be better served by not appropriating the funds in the first place, or including provisions in appropriations and authorization bills to ensure the executive branch follows lawmakers’ instructions and preferences on funding.