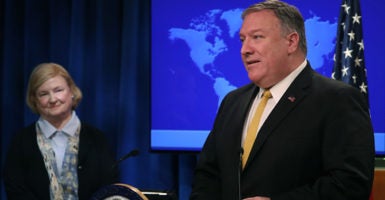 Secretary of State Mike Pompeo is joined by Harvard professor Mary Ann Glendon on Monday at the State Department while announcing the formation of a commission to redefine human rights, based on “natural law and natural rights." Glendon will chair the panel. (Photo: Mark Wilson/Getty Images)

The State Department is rolling out a new Commission on Unalienable Rights to focus on human rights worldwide from the perspective of the nation’s founding.

The commission’s focus on natural rights comes in response to what the State Department says are some of the world’s most repressive regimes hijacking the term “human rights” while infringing on individual freedom and discriminating against minority populations.

The commission is made up of rights experts, philosophers, and activists to provide advice on human rights, Secretary of State Mike Pompeo said at a press conference Monday.

“An American commitment to uphold human rights played a major role in transforming the moral landscape of the international relations after World War II, something all Americans can rightly be proud of,” Pompeo said. “Under the leadership of Eleanor Roosevelt, the 1948 Universal Declaration on Human Rights ended forever the notion that nations could abuse their citizens without attracting notice or repercussions.”

However, he said, often oppressive regimes and special interests have used the term “human rights” to promote agendas that have little to do with the traditional understanding of the term.

“It’s a sad commentary on our times that more than 70 years after the Universal Declaration of Human Rights, gross violations continue throughout the world, sometimes even in the name of human rights,” Pompeo said, adding:

International institutions designed and built to protect human rights have drifted from their original mission.

As human rights claims have proliferated, some claims have come into tension with one another, provoking questions and clashes about which rights are entitled to gain respect.

“I wanted to thank you especially for giving a priority to human rights at this moment when basic human rights are being misunderstood by many, manipulated by many, and ignored by the world’s worst human rights violators,” Glendon said at the press conference.

At the same time, I understand that the mission that you have set us is a challenging one.

You’ve asked us to work at the level of principle, not policy, and you’ve asked us to take our bearings from the distinctive rights tradition of the United States of America, a tradition that is grounded in the institutions without which rights would not be possible: constitutional government and the rule of law.

The commission should address confusion about human rights, said Emilie Kao, director of the DeVos Center for Religion and Civil Society at The Heritage Foundation.

“There is growing confusion about what constitutes an unalienable human right. Therefore, it is critical that U.S. human rights policy be based on the correct founding principles to provide leadership to the international community,” Kao told The Daily Signal, continuing:

There has been a proliferation and devaluation of human rights since the Universal Declaration of Human Rights was adopted in 1948. This has allowed the world’s worst human rights violators to deflect criticisms of their actions.

Restoring understanding of the founding principles is essential to protect the men, women, and children who suffer the worst violations of their unalienable human rights.

The commission’s goal is to ground human rights discussions relating to foreign policy in American founding principles, the State Department said. The panel is intent on steering away from discovering new principles.

“The Commission on Unalienable Rights will provide the secretary of state with advice on human rights grounded in our nation’s founding principles and the principles of the 1948 Universal Declaration of Human Rights,” a State Department spokesman told The Daily Signal.

It will serve as an advisory commission, not a policymaking body.

The commission was established, the State Department says, because principles should drive policy, not the other way around, and because the government can’t make good foreign policy without understanding what it’s defending and why.

The State Department says the commission will examine basic questions:

The founding rights belong to everyone, regardless of gender, religious beliefs, national origin, sexual orientation, and economic circumstance, the State Department contends.

But Joanne Lin, national director of advocacy and government affairs for the liberal group Amnesty International USA, contended that the new commission would undermine the rights of women and LGBT people.

“This administration has actively worked to deny and take away long-standing human rights protections since Trump’s inauguration,” Lin said in a statement. “If this administration truly wanted to support people’s rights, it would use the global framework that’s already in place. Instead, it wants to undermine rights for individuals, as well as the responsibilities of governments.”

The recognition of natural rights has been foundational to Western civilization, and provides a common cause in addressing the world’s challenges, said James Carafano, vice president for foreign policy and national security at The Heritage Foundation.

“American policy is a mixture, protecting our interests and our values. As important it is to debate if combating Islamist terrorism is a good idea, it’s equally important to make sure we refresh a common understanding of the values we are defending that undergird our policies,” Carafano told The Daily Signal, adding:

This administration is far more committed to multilateral action and values-based foreign policies than their critics would ever acknowledge.

Just as the administration has actually made NATO stronger, in like manner by refreshing an understanding of the fundamental values that guide our foreign policy, we will have more focused, more sustainable initiatives for the future—better focused on protecting America’s interests and what America stands for.

Gross violations of human rights are occurring across the world, the State Department says, while at the same time, there’s a growing skepticism about the effectiveness of international institutions that are supposed to protect human rights.