Charlie Gard’s Fight Coming to a Close, but His Legacy Will Live On 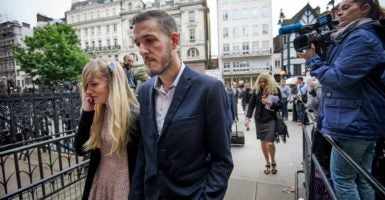 Charlie Gard's parents, Chris Gard and Connie Yates, announced they are ending their lengthy court battle over treatment for their son with a rare genetic disease. (Photo: Ben Cawthra/Sipa USA/Newscom)

The fight to save Charlie Gard, the British infant at the center of a worldwide debate about parental rights and medical treatment, is coming to a close.

On Monday, Charlie’s parents, Chris Gard and Connie Yates, announced they are ending their lengthy court battle over treatment for their son.

One month after his birth last fall, baby Charlie was diagnosed with a very rare genetic disease. It’s so rare that he is one of only 16 people in the world to have ever received the particular diagnosis. He has remained at Great Ormond Street Hospital in London ever since.

In early 2017, Charlie’s mother began raising money to pay for an experimental treatment in America. The treatment has been used in cases similar to Charlie’s, but not his particular condition.

Yet Gard and Yates never gave up on their son and continued fighting for him to receive treatment.

As Charlie’s case made its way through the courts, international attention grew. World leaders, from the pope to President Donald Trump, called for baby Charlie to have a chance for treatment at willing hospitals outside the U.K.

As international pressure and support for baby Charlie’s chance at treatment grew, Great Ormond Street Hospital announced that it was calling for a new hearing in light of “claims of new evidence relating to potential treatment for his condition.”

American neurosurgeon Michio Hirano and a team of specialists were then given the opportunity to examine baby Charlie. Unfortunately, the results revealed that Charlie’s condition has left him with irreversible damage.

During the announcement to the High Court, Charlie’s mother gave a heartbreaking statement. It read, in part:

The last 11 nearly 12 months have been the best, the worst and ultimately life changing months of our lives but Charlie is Charlie and we wouldn’t change him for the world. All our efforts have been for him.

Put simply, this is about a sweet, gorgeous, innocent little boy who was born with a rare disease, who had a real, genuine chance at life and a family who love him so very dearly and that’s why we fought so hard for him.

There is one simple reason for Charlie’s muscles deteriorating to the extent they are in now—TIME. A whole lot of wasted time. Had Charlie been given the treatment sooner he would have had the potential to be a normal, healthy little boy.

She also noted that:

Charlie had a real chance of getting better. It’s now unfortunately too late for him but it’s not too late for others with this horrible disease and other diseases. We will continue to help and support families of ill children and try and make Charlie live on in the lives of others. We owe it to him to not let his life be in vain.

We will do our utmost to ensure that no parents have to go through what we have been through and the next Charlie that comes along WILL get this medicine before it’s too late and Charlie will save many more lives in the future, no doubt about that.

Charlie’s battle for survival has received worldwide attention because his fight could be anyone’s fight. His parents’ fight could be the fight of any loving, devoted parent “prepared to do anything in their power” to preserve their child’s life.

There is no love like the love that a parent has for their child. The love that Gard and Yates have demonstrated during Charlie’s short life will ensure that his legacy will live on in the years to come.