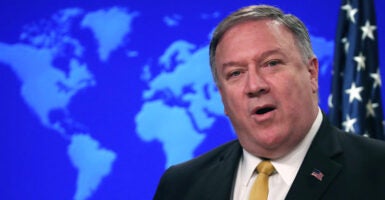 The Commission on Unalienable Rights has provided much-needed clarity to a domestic and global conversation that had become muddled and politicized. Pictured: Secretary of State Mike Pompeo announces formation of the commission during a press conference July 8, 2019, at the State Department in Washington. (Photo: Mark Wilson/Getty Images)

After the staggering human toll of World War II and the Holocaust, world leaders began a remarkable project in 1948 to identify and protect the inalienable rights shared by every human being on the planet.

But the great and noble human rights project is in crisis, as Secretary of State Mike Pompeo announced at the Constitution Center in Philadelphia on July 16 upon release of the report of the Commission on Unalienable Rights.

To confront that crisis, this particular commission was established.

As outlined in the panel’s charter, the commission report examines the origins and evolution of human rights and provides guidance on how the United States should promote human rights in its foreign policy while preserving the sovereignty of nations, upon which the principle of universality depends.

The 11 commissioners—from diverse political, religious, and professional backgrounds—identified three strands in America’s unique tradition that formed the American spirit and our understanding of human rights:

Protestant Christianity, widely practiced by the citizenry at the time, was infused with the beautiful Biblical teachings that every human being is imbued with dignity and bears responsibilities toward fellow human beings, because each is made in the image of God.

The civic republican ideal, rooted in classical Rome, stressed that freedom and equality under law depend on an ethical citizenry that embraces the obligations of self-government.

And classical liberalism put at the front and center of politics the moral premise that human beings are by nature free and equal, which strengthened the political conviction that legitimate government derives from the consent of the governed.

The Commission on Unalienable Rights went on to discuss how these foundations guided the character of the American people, the legal foundations of the United States, and the nation’s support for human rights internationally.

In its report, the commission identified two broad concerns that threaten that legacy.

First, the number of rights has dramatically proliferated. As noted by Pompeo, the original 30 rights in the Universal Declaration of Human Rights has been expanded exponentially by the United Nations and the Council of Europe into 1,377 rights provisions in 64 agreements.

The [Universal Declaration of Human Rights] was deliberately limited to a small set of rights on which there was perceived to be a near-universal consensus.

The framers also knew that keeping the list more tightly circumscribed would accord higher political importance to each of the rights and would reduce the conflicts among rights claims, conflicts that could dilute the realization of any particular right and of rights in general.

These concerns are highly relevant 70 years later, when the number of human rights instruments has multiplied dramatically. …

There is good reason to worry that the prodigious expansion of human rights has weakened rather than strengthened the claims of human rights and left the most disadvantaged more vulnerable.

More rights do not always yield more justice. Transforming every worthy political preference into a claim of human rights inevitably dilutes the authority of human rights.

Second, expansion of human rights is occurring by elevating opinions of an international bureaucracy to the level of “soft law”—a concern also raised in a recent report by Aaron Rhodes published by The Heritage Foundation.

As the commission report notes:

These sorts of claims frequently privilege the participation of self-appointed elites, lack widespread democratic support, and fail to benefit from the give-and-take of negotiated provisions among the nation-states that would be subject to them.

Indeed, U.N. experts and treaty bodies have frequently departed from texts of negotiated treaties to advance the controversial political goals of a few countries and activists.

Those goals include an international right to abortion, as detailed in a Heritage Foundation report by professor Tom Finegan, despite conflicts with internationally recognized rights, such as the right to life.

And the United Nations itself is advancing a campaign against so-called hate speech that could empower states to curtail free speech and religious freedom, as explained in a recent essay by Michael P. Farris and Paul B. Coleman of Alliance Defending Freedom.

The commission recommends careful consideration when considering these new rights claims, urging policymakers to weigh how closely they are rooted in the rights laid out in the Universal Declaration of Human Rights; whether the rights are consistent with U.S. constitutional principles and American traditions; whether the U.S. and other nations have formally given their sovereign consent to the claimed rights; whether there’s a clear consensus of support among the many cultures and traditions of the human family; and whether new rights can be integrated into the existing human rights rubric without harmful conflicts.

The commission also took on the common criticism that, because the U.S. has not ratified many human rights treaties and has chosen to participate selectively in international organizations, its commitment to human rights is suspect.

While noting the positive aspects and contributions of international treaties and deliberative bodies, the commission strongly defended the U.S. practice of caution:

Not every moral imperative and political priority need be translated into juridical form to demonstrate U.S. seriousness of purpose regarding human rights. In fact, the United States’ selective ratification and strict construction of treaties signifies the firmness of the U.S. commitment to the rule of law: The United States only accepts formally those principles to which it is prepared to adhere in practice and to be held accountable for by other nations in international law.

The converse—indiscriminate treaty ratification with little care or intention to harmonize those international obligations with domestic law and practice (as is the case with some countries)—would be far more damaging to the strength and legitimacy of international human rights law.

Similarly, the U.S. insistence on strict construction of human rights treaty provisions, rooted in the actual negotiated language of the treaties it has ratified, safeguards the integrity of sovereign consent. The U.S reservations likewise ensure respect for the democratic legitimacy of law in the United States by preventing international norms and institutions from bypassing ordinary, constitutionally authorized, democratic politics and the established lawmaking process. …

International human rights institutions can certainly play constructive roles in monitoring, supervising, and promoting human rights obligations. They can be key actors in fostering compliance with international norms. It is for these reasons that the United States has often supported such institutions, both diplomatically and financially.

At the same time, these institutions are rife with serious flaws: They are frequently subject to interest-group capture; they are not broadly representative of the societies that are putatively governed by the norms they apply; and they lack democratic legitimacy inasmuch as they vest enormous discretion in the professional elites who staff their permanent bureaucracies.

Moreover, the quality of their work is hugely variable, and even the more serious institutions are often ineffective in accomplishing their basic purposes.

Under these circumstances, maintaining a position of selective constructive engagement with international human rights institutions is reasonable.

Indeed, as noted in a recent report by law professor Jeremy Rabkin published by The Heritage Foundation, it’s essential that America’s international human rights commitments be consistent with both the U.S. Constitution’s principles and its process for treaty ratification.

This consistency preserves the rights of Americans and our sovereignty. Efforts to bypass the consent of member states to create “new human rights” will dilute democratic accountability and faith in the universality of human rights.

Overall, the report by the Commission on Unalienable Rights is a wonderful example—too rare in current times—of individuals of different backgrounds and ideological perspectives working collaboratively to arrive at agreement, much like the drafters of the Universal Declaration of Human Rights did in 1948.

By returning to the first principles of universal human rights, the commission has provided much-needed clarity to a domestic and global conversation that has become muddled and politicized.

Men, women, and children continue to face egregious rights violations around the world, and American leadership on human rights is more needed than ever. But as Pompeo noted in Philadelphia: “We can’t do good—at home or abroad—if we don’t precisely know what we believe and why we believe it.”

American lawmakers, international diplomats, and human rights advocates should heed the seriousness with which the report addresses those challenges.