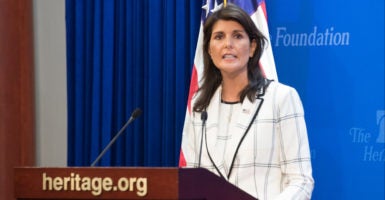 The United States’ withdrawal from the United Nations Human Rights Council has nothing to do with its commitment to human rights, Ambassador Nikki Haley said Wednesday in a fiery speech at The Heritage Foundation.

“No one should make the mistake of equating membership in the Human Rights Council with support for human rights. To this day, the United States does more for human rights, both inside the U.N., and around the world, [than] any other country. And we will continue to do that,” said Haley, U.S. ambassador to the United Nations, in prepared remarks.

“We just won’t do it inside a council that consistently fails the cause of human rights.”

On June 19, the United States announced it was leaving the United Nations Human Rights Council, citing the council’s bias against Israel and its tolerance for human rights abusers to be included in the council.

At the time of the announcement, Haley said that the council was a “protector of human rights abusers and a cesspool of political bias.”

In her speech Wednesday, the ambassador struck a similar tone, saying “the Human Rights Council has provided cover, not condemnation, for the world’s most inhumane regimes,” and that the council “is the United Nations’ greatest failure.”

Haley specifically singled out the addition of the Democratic Republic of the Congo to the U.N. Human Rights Council as inappropriate.

“In October, the Democratic Republic of the Congo was elected to a seat on the council,” Haley said. “The Congo is the setting for atrocities that shock the most hardened international aid workers. They were discovering mass graves in the Congo even as the General Assembly approved its bid for the Human Rights Council.”

In December and into this year, the Iranian people took to the streets in peaceful protest against their horrendous regime. The government responded with beatings, arrests, and killings. The Human Rights Council was silent.

And throughout the year, Venezuela descended further and further into misery and dictatorship. But the Council didn’t address the massive abuses in Venezuela for the reason I’m sure you’ve guessed by now: Venezuela sits on the Human Rights Council.

“The NGOs were afraid that opening up the Human Rights Council to changes would result in hostile amendments in the General Assembly that would make the council even worse,” Haley said. “Think about that for a second. Their view is that a bad situation can’t be improved because it might get worse?”

“We gave them opportunity after opportunity,” Haley said. “But after months of agreeing with us on all of the flaws of the Human Rights Council, they would not take a stand unless it was behind closed doors, outside of public view.”

However, Haley also extended an invitation to other nations.

“Our withdrawal from the Human Rights Council does not mean we will give up the fight for reform. On the contrary, any country willing to work with us to reshape the council need only ask,” she said.

The former governor of South Carolina said her experience visiting refugee camps in Ethiopia, Congo, Turkey, and Jordan and visits with “mothers scarred by trauma,” as well as “battered, aimless children lost to ignorance and extremism” underscore the importance of her position to advocate human rights on the world stage.