Why Civil Discourse Should Be Fruit of Liberal Arts Education 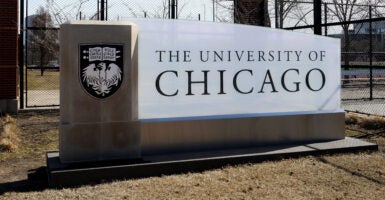 The University of Chicago’s exemplary policy indicates that free speech is “an essential part of the university’s educational mission.” (Photo: Raymond Boyd/Getty Images)

Leah Schnyders is a senior at Wheaton College and a Heritage Foundation Academy fellow.

Even in the midst of a global pandemic with many college students off campus in virtual classrooms, debates about free speech in higher education remain a hot topic.

>>> VIRTUAL EVENT: Learn how university indoctrination started, and how to stop, on Feb. 11. Register here.

For several years now, students and faculty on college campuses have witnessed “shout downs,” where invited speakers’ events were canceled due to student protests.

Although there is a chilly climate for free expression on many college campuses, nearly 70% of college students reported in a nationally representative survey released last year by the Knight Foundation that they thought free speech is “extremely important” to democracy.

However, 63% of students—nearly 10 percentage points more than in 2016—reported that “the climate on their campus deters students from expressing themselves openly.”

At the same time, an increasing number of students viewed online platforms such as Facebook, Twitter, and Instagram as their primary mode of discussion, instead of face-to-face encounters. Yet, fewer than 30% of students perceived discussions on social media as civil—a decrease of 12 percentage points in three years.

Many universities, however, might already have an internal solution to such disheartening news. The liberal arts have long been a core tenet of many established American universities and could be a key way of returning civil discourse to higher education.

An essential component of liberal education is to build communities where students can engage in spirited debates and discussions about the ideas over which humanity has engaged for centuries. Yet, if this dialogue “is to be fertile, [it] requires intellectual humility, the recognition of the dignity of all participants, and a passion for truth,” Pano Kanelos, the president of St. John’s College in Annapolis, Maryland, notes.

The liberal arts have long been taught through a series of core classes, in which students engage with various subjects through an established canon.

For instance, Yale University, one of oldest educational institutions in the Northern Hemisphere, noted in 1828 that liberal education requires “that all the important mental faculties be brought into exercise.”

“It is not sufficient that one or two be cultivated, while others are neglected. A costly edifice ought not to be left to rest upon a single pillar.”

Liberal arts education, however, is waning at many institutions of higher education.

The American Council of Trustees and Alumni surveyed two-thirds of students enrolled in liberal arts colleges nationwide. The survey reviewed the general education programs of more than 1,100 public and private universities and colleges with a stated liberal arts mission in the United States.

Their decline, combined with increased partisanship, make the reinvigoration of the liberal arts even more critical.

If universities and colleges are to remain bastions of free and open discourse, they must guarantee that all students and faculty are assured of their First Amendment rights. Canceling events will not resolve the fierce disagreements at play; rather, communities that foster open and civil dialogue have the opportunity to effect real change.

Accordingly, more institutions of higher education should adopt free speech policies, which foster the free exchange of ideas. For instance, the University of Chicago’s exemplary policy indicates that free speech is “an essential part of the University’s educational mission.”

More college administrators should similarly maintain the “solemn responsibility not only to promote a lively and fearless freedom of debate and deliberation, but also to protect that freedom when others attempt to restrict it.”

The Heritage Foundation’s Jonathan Butcher noted that those policy reforms counteract “disruptive, violent actions on public college campuses and make it harder for school administrators to make excuses for this behavior.”

“Students and adults on campus need lawmakers and administrators to protect free speech,” he added.

In an increasingly polarized world, free speech protections are essential to civil discourse. Universities and colleges should remain bulwarks of civil discourse by building communities that foster the free exchange of ideas.

Robert Zimmer, the president of the University of Chicago, emphasized the importance of free speech when he said, “We cannot shortchange our students. This means that questioning and challenging must flourish.”