The Western Tradition Saved Me From the Left. The Left Will Not Claim All College Students. 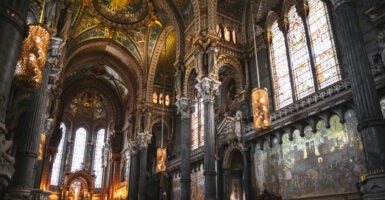 As an 18-year-old undergraduate, Nathaniel criticized Christianity, condemned classical literature, and was “woke” before it was trending. After being introduced to early Christian, Greek, and Enlightenment-era writers, his outlook changed completely. Pictured: The interior of the Basilica Notre Dame de Fourviere in Lyon, France. (Photo: Gregory_Dubus/Getty Images)

Nathaniel Urban is a graduate of the Ashbrook Scholar Program at Ashland University and The Academy at The Heritage Foundation.

The left is dismantling the Western tradition. It rejects the Greco-Roman and Judeo-Christian culture that permeates America, discredits great literature, and abandons any hint of reasonable or rational debate. Its aggressive dismantling efforts—so prevalent on Twitter and mass protests—are also on full display in general education programs at colleges and universities.

Opinions on general education courses, which is where students used to learn about Western tradition—vary across higher education. State university systems are concerned about graduate-level research, and therefore don’t focus on general education enough. Small liberal arts colleges offer a vague and mismatched cornucopia of courses that all too often fail to provide a coherent picture of the Western tradition.

The undergraduate student body of American higher education is disconnected with one another and, most importantly, with their shared heritage. Students may graduate without ever reading the Declaration of Independence, the document that boldly declares all Americans as one people and that all men are created equal.

They may graduate with little expose to ancient Greek literature, such as Homer’s “Iliad” and “Odyssey,” the oldest texts in the Western tradition that influenced over 2,000 years of art, drama, literature, philosophy, and theology.

A 1945 Harvard report, “General Education in a Free Society,” reads:

A supreme need of American education is for a unifying purpose and idea. … In recent times, however, the question of unity has become insistent. We are faced with a diversity of education which, if it has many virtues, nevertheless works against the good of society by helping to destroy the common ground of training and outlook on which any society depends.

Harvard’s report is as true as ever 75 years later. Today’s general education programs are muddled and unstructured, and students do not experience any sense of a shared heritage.

The general education programs at Amherst College, Brown University, and Hamilton College are notable examples. These institutions do not require students to complete a set of core courses. Students, instead, complete an “open” curriculum. Brown describes an open curriculum as “a personalized course of study giving students greater freedom to study what they choose and the flexibility to discover what they love.”

In contrast to the Great Books curriculum at St. John’s College or the core curriculum at Columbia University, students at Brown do not develop an appreciation for a shared heritage.

But undergraduate students yearn for community, identity, and purpose. I was one of those students.

Six years ago, at the beginning of my undergraduate education at Ashland University, I was as left as any 18-year-old. I criticized Christianity, condemned classical literature, and was “woke” before it was trending.

I was mad at the world, entitled, and ignorant. But by the guidance and friendship of several professors and strong core courses, I was exposed to the beauty, complexity, and pride of the Western tradition. Through a series of difficult conversations, Great Books, and many nights deep in thought, the course of my life and education changed forever.

I renewed my faith in Christ, read about the early Church, and recognized the peace and prosperity the Gospel brought to Earth. I discovered the ancient Greek and Roman authors set the foundation for the Middle Ages, Reformation, and Age of Enlightenment.

I learned how to think, not what to think. I listened to my opponent intently, unveiled flaws in their argument (not their character), and strengthened my argument if I presented it poorly.

But perhaps most importantly, I found my sense of community, identity, and purpose, and I was proud of my heritage.

Although many of the authors discussed are not required reading at most colleges and universities, they are still offered as optional courses. Well-informed mentors, similar to my undergraduate professors, can guide students toward the courses dedicated to cultivating virtue, citizenship, and the appreciation of a shared heritage.

It is their virtue, grace, and love, drawn out from the stories of Odysseus, King David, and St. Augustine, and cultivated by serious professors and mentors, that gives me hope.

Undergraduate students can discover community, identity, and purpose in the collective wisdom and centuries of social, political, and religious thought that is Western civilization.