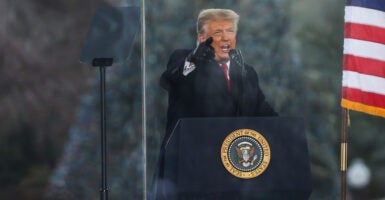 Former President Donald Trump’s lawyers have fired back against House Democrats’ charge that he incited an insurrection.

The Trump brief denies that calling for supporters to “fight” is inciting a riot. It also disputes that the Senate has jurisdiction to hold an impeachment trial, since Trump became a private citizen again Jan. 20.

Here are key points made in the brief by Trump’s lawyers.

1. Trump Did Not Incite

Schoen and Castor assert that Trump’s Jan. 6 speech at a rally near the White House did not incite the deadly riot in which protesters broke into the Capitol.

Democrats’ impeachment managers specify that Trump’s telling the crowd to “fight like hell” prompted them to attack the Capitol.

“It is denied that the phrase ‘if you don’t fight like hell you’re not going to have a country anymore’ had anything to do with the action at the Capitol as it was clearly about the need to fight for election security in general, as evidenced by the recording of the speech,” the Trump legal team’s brief says. “It is denied that President Trump intended to interfere with the counting of electoral votes.”

The Senate has rejected a resolution from Sen. Rand Paul, R-Ky., saying that the trial for Trump set to begin Feb. 8 would be unconstitutional. However, that likely will remain a major issue of debate.

Trump’s lawyers contend that since he no longer holds public office, the Senate lacks the authority to try him and possibly prohibit him from holding future federal office.

“It is denied that the quoted provision currently applies to the 45th president of the United States since he is no longer ‘president,’” the lawyers state, adding:

The constitutional provision requires that a person actually hold office to be impeached. Since the 45th president is no longer ‘president,’ the clause [in the Constitution] ‘shall be removed from Office on Impeachment for…’ is impossible for the Senate to accomplish.

Since removal from office by the Senate of the president is a condition precedent which must occur before, and jointly with, ‘disqualification’ to hold future office, the fact that the Senate presently is unable to remove from office the 45th president whose term has expired, means that [House Democrats’ allegation] is therefore irrelevant to any matter before the Senate.

It is denied that the 45th president engaged in insurrection or rebellion against the United States. The 45th president believes and therefore avers that as a private citizen, the Senate has no jurisdiction over his ability to hold office …

For the Senate to take action on the allegation would “constitute a bill of attainder” in violation of Article I, Section 9, Clause 3 of the Constitution, the lawyers said.

3. Not Unusual to Challenge Electoral Votes

Trump’s lawyers denied that, while president, he intended to interfere with the counting of Electoral College votes Jan. 6 in a joint session of Congress.

As a factual matter, challenging the counting of Electoral College votes for president has become routine after Republican victories under the Electoral Act of 1887, which allows such challenges.

In most cases, House members object but fail to get a Senate sponsor as required. Only in 1969, 2005, and 2021 did both a House member and a senator sponsor an objection to force debate over the Electoral College count.

“The purpose of the joint sessions of Congress in both 2017 and 2021 was for members of Congress “to fulfill their duty to be certain the Electoral College votes were properly submitted, and any challenges thereto properly addressed under congressional rules,” the lawyers said, adding:

In Roberts’ absence, Senate President Pro Tempore Patrick Leahy, D-Vt., a vocal critic of Trump over the past four years, is set to preside over the trial. Leahy voted to convict and remove Trump from office in the first impeachment trial early last year.

In their brief, Trump’s lawyers argue:

Once the 45th president’s term expired, and the House chose to allow jurisdiction to lapse on the article of impeachment, the constitutional mandate for the chief justice to preside at all impeachments involving the president evidently disappeared, and he was replaced by a partisan senator who will purportedly also act as a juror while ruling on certain issues.

The House actions thus were designed to ensure that Chief Justice John Roberts would not preside over the proceedings, which effectively creates the additional appearance of bias with the proceedings now being supervised by a partisan member of the Senate with a long history of public remarks adverse to the 45th president.