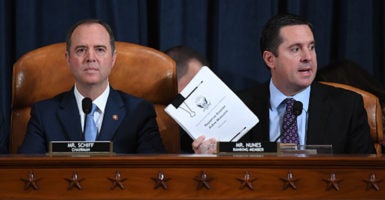 The Republican response to House Democrats’ impeachment case asserts that “evidence does not establish” that President Donald Trump used U.S. military aid for personal political ends, while arguing that the findings amount to a policy disagreement in which unelected bureaucrats seek a final say over an elected president.

“In our system of government, power resides with the American people, who delegate executive power to the president through an election once every four years,” says the minority report from Republican members of the House Permanent Select Committee on Intelligence, a copy of which The Daily Signal reviewed Monday. The report adds:

Unelected officials and career bureaucrats assist in the execution of the laws. The unelected bureaucracy exists to serve the elected representatives of the American people. The Democrats’ impeachment narrative flips our system on its head in service of their political ambitions.

Democrats are expected to try to make the case that Trump’s July 25 phone call with Ukraine President Volodymyr Zelenskyy constituted bribery, based largely on the public testimony of veteran foreign service officials, most of whom did not listen in on the call.

An official White House transcript shows the two leaders talked briefly about Joe Biden’s son, Hunter Biden, who sat on the board of the controversial Ukrainian energy company Burisma while his father was Barack Obama’s vice president.

Trump also referred in the conversation to the former Ukrainian government’s possible attempts to meddle in the 2016 election.

“Biden’s Burisma has an international reputation as a corrupt company,” the GOP’s minority report says. “As far back as 2015, the Obama State Department had concerns about Hunter Biden’s role on Burisma’s board. Ukrainian anticorruption activists noted concerns as well.”

Publicly available—and irrefutable—evidence shows how senior Ukrainian government officials sought to influence the 2016 U.S. presidential election in opposition to President Trump’s candidacy, and that some in the Ukrainian embassy in Washington worked with a Democrat operative to achieve that goal. While Democrats reflexively dismiss these truths as conspiracy theories, the facts are indisputable and bear heavily on the Democrats’ impeachment inquiry.

After five days of public testimony before the House Intelligence Committee chaired by Schiff, D-Calif., Democrats’ impeachment process now moves to the House Judiciary Committee, which will review the findings.

The GOP report notes that Ukraine got nearly $400 million in congressionally approved military aid, albeit delayed, and that Trump had legitimate reasons to be concerned about corruption in Ukraine. It also says the president long has been skeptical about foreign assistance and questioned why European allies weren’t spending more on their own security.

The minority report notes that House Democrats introduced four separate impeachment resolutions in 2017 and 2018, Trump’s first two years as president, and another on their first day as a majority in January 2019.

Republicans also complain in the report about the partisan nature of the House impeachment hearings: