On Eve of Impeachment Vote, Trump Punches Back Against Pelosi 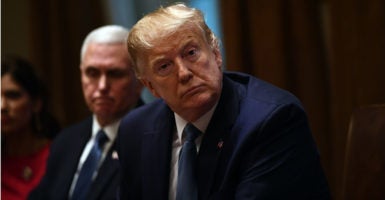 President Donald Trump and Vice President Mike Pence meet with state and local leaders, including governors, to highlight deregulatory accomplishments and help scale similar accomplishments at every level of government as part of the Governors' Initiative on Regulatory Innovation at the White House on Dec. 16. (Photo: Brendan Smialowski/AFP/Getty Images)

“You dare to invoke the Founding Fathers in pursuit of this election-nullification scheme — yet your spiteful actions display unfettered contempt for America’s founding and your egregious conduct threatens to destroy that which our Founders pledged their very lives to build,” Trump wrote.

The full House is scheduled to debate and vote Wednesday—likely along party lines—on two impeachment articles that passed the House Judiciary Committee last week. The articles accuse the president of abuse of power and obstruction of Congress.

Impeachment has to pass by only a simple majority in the House. It requires 67 senators, or a two-thirds majority, to convict and remove a president if the Republican-controlled Senate holds a trial.

Trump asserted in his letter that the pending vote in the House “cheapened the importance of the very ugly word, impeachment.”

“More due process was afforded to those accused in the Salem witch trials,” the president wrote.

During the conversation, the two leaders talked briefly about Trump’s interest in Ukraine’s investigating the conduct of former Vice President Joe Biden’s son, Hunter Biden, as a highly paid board member of the Ukrainian energy company Burisma while the senior Biden was President Barack Obama’s point man for Ukraine policy.

At the time of the phone conversation, Trump had put a hold on nearly $400 million in U.S. military aid to Ukraine, although Zelenskyy apparently did not know this. The president released the aid in September.

In his letter to Pelosi, Trump noted that Biden boasted last year about forcing the firing of Ukraine’s state prosecutor, who was investigating Burisma, by threatening to withhold $1 billion in U.S. aid.

Your chosen candidate lost the election in 2016, in an Electoral College landslide (306-227), and you and your party have never recovered from this defeat. So you have spent three straight years attempting to overturn the will of the American people and nullify their votes. You view democracy as your enemy!

The obstruction charge stems from Trump not cooperating with the House impeachment investigation. The struggle between the legislative and executive branch has not been adjudicated yet by the judiciary.

On this point, Trump wrote, House Democrats were “trying to impeach the duly elected president of the United States for asserting Constitutionally-based privileges that have been asserted on a bipartisan basis by administrations of both political parties throughout our nation’s history.”

“It is a terrible thing you are doing, but you will have to live with it, not I!” Trump said.