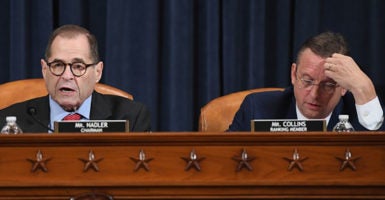 The House Judiciary Committee voted Friday morning along party lines to impeach President Donald Trump, sending two charges to the House floor for what is expected to be another party-line vote next week to set up a Senate trial in January.

Now attention turns to the 31 House Democrats who were elected last year in congressional districts Trump won in 2016. Democrats can lose no more than 17 “yes” votes in order to impeach Trump.

“For the third time in a little over a century and a half, the House Judiciary Committee has voted articles of impeachment against the president for abuse of power and obstruction of Congress. The House will act expeditiously,” Judiciary Chairman Jerry Nadler, D-N.Y., told reporters in brief remarks after the committee votes.

In two separate actions following 14 hours of contention Thursday between the committee’s Democrats and Republicans, the panel voted 23-17 Friday to approve two articles of impeachment: abuse of power and obstruction of Congress.

The committee first voted to impeach Trump for abuse of power over his July 25 phone call to Ukrainian President Volodymyr Zelenskyy. During the conversation, the two leaders talked briefly about Trump’s interest in Ukraine’s investigating the conduct of former Vice President Joe Biden’s son, Hunter Biden, as a highly paid board member of the Ukrainian energy company Burisma while the senior Biden was President Barack Obama’s point man for Ukraine policy.

Democrats contend Trump was trying to pressure and coerce the newly elected Zelenskyy to announce a politicized investigation at a time when Trump had put a hold on $391 million in U.S. military assistance to Ukraine.

However, both Trump and Zelenskyy insist there was no pressure. Trump released the aid in September.

Speaking to the press pool after the committee votes, Trump said the actions will “trivialize” impeachment from this point forward.

“To be using this for a perfect phone call where the president of that country [Ukraine] said there was no pressure at all, didn’t even know what we were talking about. It was perfect,” Trump said, adding:

The relationship [with Zelenskyy] was perfect. I’ve done much more for them than Obama did for them. It’s a scam. It’s something that shouldn’t be allowed, and you are trivializing impeachment. And I’ll tell you what, someday there will be a Democrat president and there will be a Republican House, and I suspect they are going to remember it. That’s what happens when you use impeachment for absolutely nothing—other than to try and get political gain.

In its second action, the Judiciary Committee voted to impeach Trump for obstruction of Congress for not allowing subpoenaed administration witnesses to testify and otherwise not cooperating with House Democrats’ impeachment investigation.

Two Democrats had joined all Republicans in opposing the House’s formal impeachment inquiry.

The Judiciary Committee debated the two articles for about 14 hours Thursday during a “markup” session that lasted until almost midnight.

Friday morning, Nadler essentially gaveled in, held the two votes, and gaveled the meeting to a close in about 10 minutes.

“This desperate charade of an impeachment inquiry in the House Judiciary Committee has reached its shameful end,” Grisham said. “The president looks forward to receiving in the Senate the fair treatment and due process which continues to be disgracefully denied to him by the House.”

Some moderate Democrats are expected to defect in the House floor vote next week, but House Speaker Nancy Pelosi needs only a simple majority to approve articles of impeachment.

In the Senate, 67 votes—a two-thirds majority—are needed to convict and remove a president.

If the House approves articles of impeachment next week, Trump will become only the third president in American history to be impeached.

In 1868, the House impeached President Andrew Johnson for firing a Cabinet official without Senate approval—a violation of the Tenure of Office Act. Johnson survived a Senate trial by one vote.

In 1998, the House impeached President Bill Clinton for perjury and obstruction of justice in connection with his attempts to cover up an affair with a White House intern. Neither article of impeachment gained a Senate majority.

The House Judiciary Committee approved three articles of impeachment against President Richard Nixon in 1974 related to the Watergate scandal, but Nixon resigned before the full House voted.