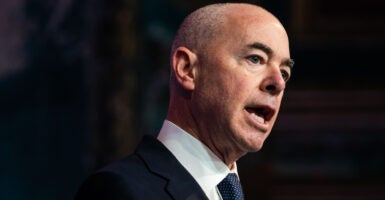 The Senate is set to vote Tuesday on President Joe Biden’s choice to lead the Department of Homeland Security.

Alejandro Mayorkas, who has kept a high, occasionally controversial political profile in California and Washington since the 1990s, is the son of Cuban immigrants.

Mayorkas, 61, is an alumnus of Beverly Hills High School who graduated the University of California, Berkeley, and then got a law degree from Loyola University.

The upside for Mayorkas is that he already has been confirmed three times by the Senate; however, in that time he hit some snags, including a scathing inspector general’s report.

Here are four things to know about Biden’s nominee to be secretary of homeland security.

From 2009 through 2013, Mayorkas was director of U.S. Citizenship and Immigration Services. He oversaw programs such as the EB-5 Immigrant Investor Program, which provides a path to green cards for foreign investors who are willing to spend $500,000 on U.S. businesses with the potential to grow jobs.

After winning a second term in 2012, President Barack Obama promoted Mayorkas to deputy director of the Department of Homeland Security.

In 2015, a report from the agency’s Office of Inspector General determined that Mayorkas appeared to run the EB-5 program in a politicized way by assisting those with close ties to Democrats such as then-Senate Democratic Leader Harry Reid of Nevada, then-Virginia Gov. Terry McAuliffe, and then-Secretary of State Hillary Clinton.

“The juxtaposition of Mr. Mayorkas’ communication with external stakeholders on specific matters outside the normal procedures, coupled with favorable action that deviated from the regulatory scheme designed to ensure fairness and evenhandedness in adjudicating benefits, created an appearance of favoritism and special access,” the inspector general’s report says.

The IG report focused on allegations of favoritism toward foreign investment in a Las Vegas casino project supported by Reid.

It also detailed foreign investment in an electric car company pushed by McAuliffe, a former chairman of the Democratic National Committee. Anthony Rodham, brother of Hillary Clinton,  also was a backer of the electric car project.

Mayorkas released a statement at the time asserting that he had inherited a “badly broken” EB-5 program.

“While I disagree with the Inspector General’s report, I will certainly learn from it and from this process,” he said.

This sticking point came up during Mayorkas’ confirmation hearing before the Senate Homeland Security and Governmental Affairs Committee and led Sen. John Cornyn, R-Texas, and other Senate Republicans to attempt to hold up a vote to confirm Mayorkas until after another hearing to gather more information.

However, five Republicans voted with Democrats last week to allow the vote to proceed.

2. Cashing In Between Tours

After the Obama administration, Mayorkas went back to the private practice of law with the Washington-based international firm WilmerHale, earning $3.3 million representing major corporate clients.

WilmerHale has more than 1,000 lawyers and 13 offices in the United States, China, Germany, Britain, and Belgium.

The Obama administration opposed a merger of T-Mobile and Sprint, but Mayorkas worked to make that merger happen while in private law practice.

Beginning in 1989, Mayorkas was a career prosecutor in the U.S. Attorney’s Office for the Central District of California, rising to become chief of the general crimes section.

When the Senate confirmed him, he became the youngest U.S. attorney in the country at age 38.

He also oversaw prosecution of white supremacist Buford O. Furrow Jr. in 1999 on charges of shooting children with a submachine gun at the North Valley Jewish Community Center in Granada Hills, Los Angeles, and, shortly afterward, murdering a postal worker with a handgun.

4. DACA and Disease at DHS

After Obama became president in 2009, he tapped Mayorkas to lead U.S. Citizenship and Immigration Services and then promoted him to deputy secretary of DHS in 2013.

Mayorkas led implementation of the Deferred Action for Childhood Arrivals program, an Obama administration executive action that shielded from deportation illegal immigrants brought to the country as minors.

“If somebody submits documents that show by the preponderance of the evidence that they meet the guidelines, we are poised to move the cases as quickly as possible,” Mayorkas told The New York Times in 2012.

As deputy DHS secretary, he led the department’s response to the Ebola and Zika viruses. This experience later prompted WilmerHale to put him in charge of the law firm’s COVID-19 task force.

The Biden administration has identified moving forward on DACA and combating COVID-19 as key priorities.