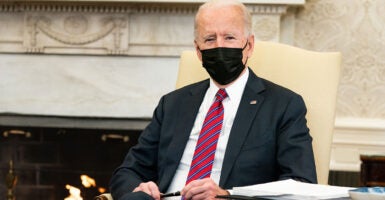 President Joe Biden meets with Treasury Secretary Janet Yellen in the Oval Office of the White House Jan. 29, 2021, in Washington, D.C. Biden and the administration officials in the room stressed the need to urgently pass a COVID-19 relief package. (Photo: Anna Moneymaker-Pool/Getty Images)

President Joe Biden contends there is “nothing we can do to change the trajectory of the pandemic in the next several months,” which is the exact opposite of what presidential candidate Joe Biden promised voters during the 2020 campaign.

And by “exact opposite,” I mean the president’s alleged plan to beat the coronavirus literally said that “the trajectory of COVID-19 in America is headed in the wrong direction” and only he could fix it.

The Biden “plan” amounted to a slew of nebulous promises that would be implemented to correct the “Trump fiasco,” such as accelerating the development of a vaccine, producing more masks, and pressuring governors to sign mask mandates.

Biden repeatedly promised to alter the trajectory of COVID-19. In a platitudinous Oct. 23 speech, Biden pledged to “immediately put in place a national strategy that will position our country to finally get ahead of this virus and get back our lives.”

“Immediately” is an adverb meaning at once, instantly, without any intervening time. It does not mean waiting around to take credit for when the Trump-era vaccines kick in.

One of the silliest talking points pushed by left-wing pundits during the election was to say that Biden had warned us about the pandemic.

Evidence of this contention revolves around a single USA Today column in which the then-presidential candidate noted that there were at “least five cases” of COVID-19 in the United States, and there “will likely be more.” Hardly Nostradamus.

Worse still, Biden continually underestimated the speed with which medical technology would move. It’s true that Operation Warp Speed was a rare “public-private partnership” success. Yet, every time former President Donald Trump promised that a vaccine would be available by the end of the year, “fact-checkers” were deployed to claim this was a lie.

By Dec. 23, the United States led the world in vaccinations, with over a million people vaccinated. This despite the fact that, during the presidential campaign, Democrats such as Kamala Harris engaged in a cynical partisan effort to erode trust in government by intimating that the efficacy and safety of vaccines would be compromised under the Trump administration.

Now, CNN reports that the Biden administration has inherited “no coronavirus vaccine distribution plan to speak of from the Trump administration.” An anonymous source claims that “there is nothing for us to rework. … We are going to have to build everything from scratch.”

Why does CNN allow anonymity in a piece bashing the previous administration? Most likely because the claim is obviously untrue. Even National Institute of Allergy and Infectious Diseases Director Dr. Anthony Fauci refuted the notion. Indeed, the very existence of the vaccine refutes the notion as well.

Then again, if there were no vaccine plan—or, as is the case, we need a better one—why wasn’t the Biden administration ready with its own?

The president had promised to “seek out governors and mayors and other leaders of both parties, from every state, territory, and tribe, and consult with education, technology, business, and labor leaders”—basically, everyone but your sister—so he’d be “ready to hit the ground running and fight the virus as our next president.”

The phrase “hit the ground running” means to start a new activity immediately and with a lot of enthusiasm.

At a White House press conference on Thursday, Biden claimed that the Trump administration’s distribution of coronavirus vaccines had been a “dismal failure,” and set a goal to vaccinate 100 million Americans by the end of April—or, around 1 million people per day. But on the day before Biden made his promise, there had already been 1.6 million doses administered in the United States, according to Bloomberg.

One hopes Biden’s plan isn’t to slow down inoculations, and that his “plan” was just a clumsy attempt to convince a compliant press to give him credit for existing accomplishments.

When a reporter gently pushed back and noted how unambitious the administration’s goals were, Biden shot back: “When I announced it you all said it wasn’t possible. Come on, give me a break, man.” Did they? Who did? The Trump administration “plan” showed that the U.S. was set to administer at least 170 million doses by the end of April.

Now, I’m skeptical that there was much more the Trump administration could have done to stop the spread of the coronavirus.

Almost everything we have done has been reactive. Nearly every economic and political system has also struggled to contain the virus. Nearly every state, blue and red. That, however, wasn’t an outlook shared by Democrats, who blamed Trump personally, and Republicans generally, for the deaths of hundreds of thousands of citizens.

Biden is now imbued with the same powers as Trump—even more, with effective control of both houses—and all he’s done is deflect.