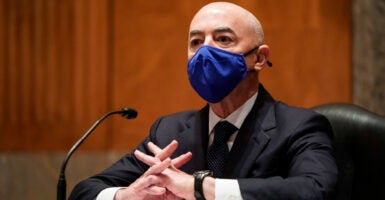 Alejandro Mayorkas, nominee to be secretary of homeland security, will advance the Biden administrations policy of providing amnesty for illegal aliens if confirmed. He is pictured here testifying during a Senate Homeland Security and Governmental Affairs confirmation hearing on Jan. 19. (Photo: Joshua Roberts-Pool/Getty Images)

United States senators will soon have a chance to support or oppose massive amnesty for illegal aliens and open borders policies.

These policy decisions will permanently alter the nation’s sovereignty and security. This opportunity is in the form of the confirmation vote for the next secretary of the Department of Homeland Security, Alejandro Mayorkas.

The Biden administration has promised the largest amnesty for illegal aliens in American history.

While President Joe Biden today suggested legislation to turn virtually all illegal aliens into voting U.S. citizens, an unknown number that they claim is only 11 million, this will not close the door on his administration taking immediate actions to administratively push amnesty as far as possible. This task will largely be left to the next secretary of the Department of Homeland Security.

As The Heritage Foundation has consistently noted, “Amnesty undermines the rule of law and encourages more unlawful migration. Grants of amnesty, regardless of the form of the reward they give to aliens who knowingly enter or remain in the U.S., discourage respect for the law, treat lawbreaking aliens better than law-following aliens, and encourage future unlawful immigration into the United States.”

There is no confusion about the contents of the Biden immigration and border security agenda. There is no question that the DHS secretary would execute that agenda. The only question is whether the Senate will allow it to happen.

The administration will tell Immigration and Customs Enforcement to stand down and not enforce the law. It will cease construction of border wall on our southern border (even for areas where Congress has already appropriated funds) and consider tearing down portions.

It will attempt to end the Migrant Protection Protocols, whereby those claiming asylum on the southern border wait in Mexico while their claims are adjudicated. This change will result in individuals being allowed to wait in—and released into—the U.S. instead, when we know the vast majority of their claims are fraudulent or lack merit.

It will extend the unconstitutional Deferred Action for Childhood Arrivals program and abuse the temporary protected status of humanitarian relief to shield large communities of illegal immigrants from removal.

It will not commit to turning caravans of illegal aliens away, and instead will time the arrival of them.

Knowing all of this, confirming the next DHS secretary is confirming the amnesty and open borders agenda. It will lead to even more illegal immigration as the message is loudly sent south of border: Come, we won’t remove you, we will reward you.

Under the Constitution, the Senate has the power to advise and consent, or to withhold consent, to certain high-level appointments.

A vote to confirm, or not to confirm, should be a vote based on the policy consequences of confirming an individual. If an individual promises to carry out policies that are not in the United States’ best interests, then withholding consent is appropriate.

With the nomination for the next secretary of homeland security on the horizon, senators will make clear whether they consent to amnesty and open borders.