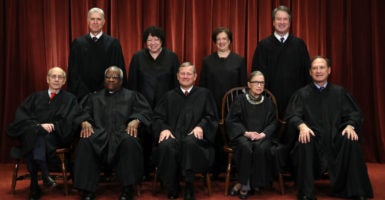 The Supreme Court justices are faced with deciding whether it’s reasonable for the president to abandon an arguably unlawful program put in place by a predecessor. (Photo: Chip Somodevilla/Getty Images)

President Barack Obama had previously explained that such a program was beyond the scope of the executive branch’s authority, saying in an interview, “I’m not the emperor … My job is to execute laws that are passed. And Congress right now has not changed what I consider to be a broken immigration system.”

Nevertheless, the Obama administration went on to create the Deferred Action for Childhood Arrivals  program in 2012, allowing about 700,000 illegal aliens who came to the United States as children to apply for work authorization and deferred deportation.

Fast-forward to 2017, the Trump-led Department of Homeland Security announced it would roll back the program that likely violated the constitutional separation of powers as well as federal immigration laws.

As justification, it pointed to court rulings invalidating a related program for illegal alien parents of U.S. citizens or lawful permanent residents.

The rollback decision drew immediate legal challenges across the country, and three district courts ruled against the administration.

In the course of the litigation, then-Secretary of Homeland Security Kirstjen Nielsen issued a memorandum more fully explaining the administration’s reasons for rolling back DACA, including that it is likely unlawful and also runs counter to the agency’s law enforcement priorities.

Now at the Supreme Court, the justices are faced with deciding whether it’s reasonable for the president to abandon an arguably unlawful program put in place by a predecessor.

The Trump administration argues that federal law bars review of agency enforcement decisions, such as the DACA rollback, that are “committed to agency discretion by law.” But if the decision is reviewable, the administration maintains that it was rational to abandon an unlawful program.

The following are a few key exchanges from the oral argument:

Justice Elena Kagan asked why the underlying DACA policy would be reviewable by courts, but the rescission of that policy would not be. “Are you suggesting that there’s an asymmetry in what’s reviewable?” she asked U.S. Solicitor General Noel Francisco.

He replied that neither “side is arguing that the [Immigration and Nationality Act] somehow restricts our ability to enforce the law. And it would be quite surprising if Congress were to pass a law that says something is illegal and then tries to somehow restrict the government’s ability from enforcing the laws that it passes.”

In essence, the administration argued that DACA deviated from federal immigration laws and that its rollback would bring the government back into compliance with the law.

2. How Strong Are DACA’s Reliance Interests?

Justice Samuel Alito asked about whether this action would “remove certain benefits,” and Francisco explained that benefits expire “on their own terms” because DACA did not actually confer any benefits.

Justice Neil Gorsuch wanted to know about how much DACA recipients relied on the program continuing—had the administration “adequately considered” these reliance interests?

Francisco asserted that “to the extent there are any reliance interests, they’re extremely limited.” The DACA program “was always meant to be a temporary stopgap measure that could be rescinded at any time, which is why it was only granted in two-year increments,” he explained. “So, I don’t think anybody could have reasonably assumed that DACA was going to remain in effect in perpetuity.”

Further, Francisco pointed out that the other side “has agreed that we could rescind DACA at any time if, at least in their view, we did provide a little bit more detailed of an explanation. So, I think that is foursquare against the notion that there are some significant reliance interest, because all that they seem to be saying is, we have to write a few more words.”

Gorsuch asked Ted Olson, the lawyer representing DACA recipients, about reliance interests and why the government’s rationale for rolling back DACA was supposedly insufficient: “What good would another five years of litigation over the adequacy of that explanation serve? … What more would you have the government say about [the] reliance interests?”

Olson responded that there wasn’t an administrative record supporting the government’s determination.

3. A Matter of Enforcement Priorities?

Justice Ruth Bader Ginsburg brought up the claim that DACA was simply prioritizing how to handle the estimated 11 million illegal aliens present in the country.

Francisco countered that DACA “goes far beyond simply diverting resources to higher-priority targets,” and “it actively facilitates violations of the law.”

Kagan said the Obama administration based its decision to implement DACA on the Immigration and Nationality Act’s “grant of broad discretion over national immigration enforcement policy.”

Francisco replied that “the most that does is, it gives you the authority to set policies and priorities,” and that “there’s a big leap between that and saying that you can affirmatively facilitate violations of the [law] by hundreds of thousands of individuals to whom Congress has repeatedly declined a pathway to lawful status.”

Gorsuch wanted to know what limiting principle the challengers believe the court should adopt on whether to review this kind of agency enforcement decision.

Olson suggested “it’s a composite of principles,” including “a categorical determination involving a substantial number of people.”

But Gorsuch jumped in. “Let me just stop you there, though, because, if it’s categorical, and a large number of people, I can think of a lot of prosecutorial decisions involving drug cases, the treatment of marijuana in … our society today under federal law… [that] affects lots of people on a categorical basis every day,” he said.

Olson explained that the government’s decision not to prosecute certain drug cases is “completely different,” because people who have set up businesses and relied on the government’s statements about not prosecuting marijuana cases “are not invited to participate in a program … to come forward” the way DACA recipients were.

5. Does the Administration Believe DACA Is Illegal? And Does It Matter?

One of the points that the justices returned to throughout the argument was the claim that the Department of Homeland Security felt compelled to roll back DACA because it was illegal.

The challengers maintain that this isn’t a sufficient reason.

Chief Justice John Roberts asked Michael Mongan, the solicitor general of California arguing on behalf of several states seeking to uphold DACA, “Is it enough … to say, look, ‘I’ve got a decision from the [lower court] that tells me [the other deferred deportation program] is illegal. It’s been affirmed by the Supreme Court by an equally divided vote. That’s enough for me to say we’re not going to [continue DACA]’?”

Mongan replied, “It’s not enough … given the nature of this program and the interests at stake, we don’t think that any genuine statement of legal doubt or litigation risk would be adequate.”

Kagan wanted to know what an adequate explanation would look like. “What do you think they would have to do to be in the clear on this?” she asked. Mongan asserted that the government should “at least have to identify the particular grounds that they’re relying on” and take “ownership of a discretionary choice to end this policy.”

“We do think that DACA is illegal and was justifiably … rescinded on that basis,” he said.

After 80 minutes of oral argument, several of the justices seemed concerned that there wasn’t much more the Trump administration could offer to support the DACA rollback decision.

A ruling for the challengers that simply required the Department of Homeland Security to bulk up its legal and policy rationales for rolling back DACA would likely lead to more years of litigation, as Gorsuch pointed out.

DACA was supposed to be a temporary fix to allow Congress more time to consider the hotly debated issue of how to handle the presence of illegal aliens in our country. But instead, Congress has not come up with a solution.

The Supreme Court should allow the Trump administration to roll back DACA and to set its own immigration enforcement priorities. Then, the ball will be back in Congress’ court.