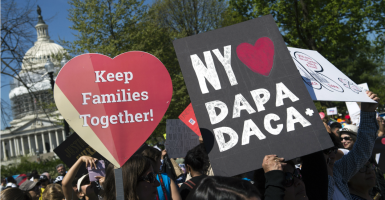 This case underscores the importance of each branch of the federal government respecting the limits of its authority. (Photo: Kevin Dietsch/UPI/Newscom)

The Supreme Court heard oral arguments today in a case brought by Texas and 25 other states challenging the Obama administration’s attempt to give legal status and work authorizations to more than 4 million illegal immigrants.

At the argument, the justices wrestled with whether the Obama administration exceeded its authority and whether the states have standing to sue.

In 2012, the Obama administration created the Deferred Action of Childhood Arrivals program, enabling 1.7 million illegal aliens under 30 years old brought to the U.S. as children to apply for work authorization and deferred deportation. A deferred action is relief from deportation or removal proceedings granted by the Department of Homeland Security.

Then, in 2014, this program was expanded by, among other things, eliminating the age cap and increasing the term of deferred action and employment authorization from two to three years.

In addition to lawful presence, Deferred Action for Parents of Americans grants deferred action recipients benefits such as work authorizations, driver’s licenses, Social Security, and other government benefits, costing an estimated $324 million over the next three years, according to the district court.

What the Supreme Court is Considering

Last November, a federal appeals court ruled in favor of the states, finding that they were likely to succeed on the merits of their claims that DAPA violated the Administrative Procedure Act.

Here are the four issues the Supreme Court justices are considering:

U.S. Solicitor General Don Verrilli was first up at the oral argument. Nearly half of his time was taken up with questions about whether the states have standing to bring this suit.

Do the States Have Standing to Sue?

In any lawsuit, the plaintiff must establish there is an actual injury that is fairly traceable to the defendant’s conduct and it is capable of being redressed by a court. The lower court held that Texas has standing to sue because Deferred Action for Parents of Americans would enable at least 500,000 illegal aliens to receive subsidized Texas driver’s licenses, costing the state millions of dollars.

The Obama administration has argued that this injury is “one of Texas’s own making,” because the state could eliminate its driver’s license subsidy program. At the oral argument, Chief Justice John Roberts seized on this, pointing out that it’s “a real catch-22” if Texas can’t sue based its financial injury from granting driver’s licenses when it might be sued by the federal government if it fails to do so.

Turning to the merits of whether DAPA is consistent with existing immigration laws, Justice Anthony Kennedy pointed out that it seemed “upside down” that the president, rather than Congress, could expand deportation deferrals to 4 million individuals. Justice Ruth Bader Ginsburg chimed in, asking whether it matters that Congress has not appropriated enough funds to deport all 11 million illegal aliens currently in the country.

When Scott Keller, solicitor general of Texas, took the podium, he barely got a few words in before Justice Sonia Sotomayor pounced with a series of questions about whether the actions of past presidents (such as Reagan, Clinton, and Bush) were really all that different from Obama’s DAPA program. Keller explained that Congress (which is the lawmaking branch, after all) must authorize the executive branch to act before it does so and that DAPA is “unprecedented, unlawful, and the biggest change in immigration policy ever.”

Justice Stephen Breyer brought the conversation back to the matter of standing. He noted that the Supreme Court rejected analogous cases in 1923 involving claims that the federal Maternity Act interfered with states’ authority. Keller responded that unlike the 1923 cases, which pressed claims based on taxpayer standing (a theory long rejected by the justices), DAPA imposes an injury on Texas’s sovereign interests. Breyer countered that this theory would allow states to seek to invalidate numerous federal laws.

Breyer, however, seemed to be overlooking a case of more recent vintage, Massachusetts v. Environmental Protection Agency (2007), in which the Supreme Court found that states had standing to challenge the agency’s denial of a rulemaking petition to regulate greenhouse gases as air pollutants.

In that case, the majority (including Breyer), wrote, “States are not normal litigants for the purposes of invoking federal jurisdiction.” A state has an “independent interest…in all the earth and air within its domain” that “reinforces the conclusion that its stake in the outcome of the case is sufficiently concrete.”

If you substitute “earth and air” for any number of state resources, such as education, healthcare, and law-enforcement costs, that DAPA implicates, Texas’s argument doesn’t sound all that different. (It’s worth noting that Massachusetts v. EPA has been maligned by conservatives as creating a new rule for standing.)

Respecting the Limits of Federal Authority

At its core, this case underscores the importance of each branch of the federal government respecting the limits of its authority and of each branch working to keep the others in check. President Obama repeatedly acknowledged that he lacks the authority he now asserts. A year before the administration announced its new immigration “enforcement priorities” (leading to the current case), Obama said:

I’m the president of the United States. I’m not the emperor of the United States. My job is to execute laws that are passed. And Congress right now has not changed what I consider to be a broken immigration system. And what that means is that we have certain obligations to enforce the laws that are in place, even if we think that in many cases the results may be tragic…We’ve kind of stretched our administrative flexibility as much as we can.

Let’s hope the Supreme Court justices agree with the Obama of 2013 and not the Obama of 2016 whose administration has promised “audacious executive action” in his final year in office.

If the Supreme Court does not help restore the balance of power we will be farther down the road toward becoming a government of men, rather than one of laws, as intended by our Founding Fathers.