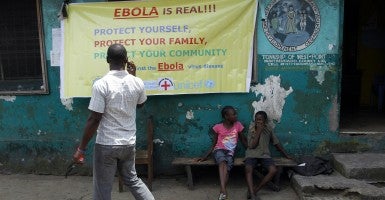 President Obama announced today additional efforts to contain the Ebola outbreak in West Africa.  The Ebola crisis has been ongoing for more than six months.  Here are answers to your questions.

Ebola is a severe, often fatal virus that is in the hemorrhagic fever category. The symptoms include sudden onset of fever, intense weakness, muscle pain, headache and sore throat. This is followed by vomiting, diarrhea, rash, impaired kidney and liver function, and in most cases, both internal and external bleeding. The fatality rate in the current outbreak is between 60 percent and 90 percent. In previous outbreaks it has killed 79 percent of those infected. Treatment requires intensive infection control precautions. Isolation and comfort often is the only recourse.

Is there a vaccine or cure?

While there is no officially recognized Ebola vaccine or cure, there is a highly experimental drug known as ZMAPP that is being developed by MAPP Biopharmaceutical Inc. in San Diego, Calif.  ZMAPP is a product for treatment, not a vaccine or preventative product.  ZMAPP was administered to the two Americans who contracted Ebola in Liberia in July and is believed to have improved their individual conditions significantly, allowing for their individual medical evacuations to the United States.

>>> EXCLUSIVE: The Amazing True Story of the Doctor Who Got — And Beat — Ebola

The drug has shown promise in small experiments with monkeys, but has not been approved for human use because it has not gone through the clinical trial process.  Administration of ZMAPP was likely approved under the Federal Drug Administration’s emergency Investigational New Drug application. In light of the drug’s effectiveness with the American patients, the Defense Threat Reduction Agency (DTRA) allocated additional funding to MAPP for ZMAPP’s development on July 30.

When were the first cases reported in the current outbreak?

The current Ebola outbreak started in Guinea in February 2014.

How does it spread?

Ebola is normally transmitted through direct contact of broken skin or mucous membranes with blood or bodily fluids of infected animals or humans. It also can be transmitted by contact with contaminated environments, such as needles or latex gloves. Humans initially come into contact with the virus when someone handles or eats raw meat from an infected bat or monkey.

The incubation period for Ebola is two to 21 days. Only then do infected persons exhibit signs of the virus. This means infected persons could travel to other areas, including distant destinations, if traveling by automobile, rail or airplane before they know they are sick. Although it cannot be passed on until symptoms begin to show, the virus could be inadvertently introduced to new populations before the carrier knows they are contagious. Family members of Ebola victims, morticians handling their bodies and healthcare workers are at elevated risk.

How many people have died?

More than 3,600 people have contracted Ebola in West Africa since March 2014 and more than 1,800 people have died from the virus as of August 31, 2014, according to the World Health Organization.  There is substantial evidence of underreporting of Ebola cases, which likely puts the actual figure much higher than the official number.

How many countries have been affected?  Will it spread to more?

There has been “widespread and intense transmission” in Guinea, Liberia and Sierra Leone.  There have “initial cases and localized cases” in Senegal and Nigeria.

Yes, the outbreak will likely spread to more countries in West Africa given the region’s porous borders, lack of public health awareness and poor sanitation conditions.  As long as the epidemic continues to grow faster than efforts to contain it, it will continue to be a serious threat the region.

It is also important to note that there has been a separate Ebola outbreak identified in the Democratic Republic of Congo (DRC).  The DRC outbreak is a separate strand of the Ebola virus that is not connected to the strand affecting people in West Africa.

Have any Americans contracted Ebola?

Overall, four Americans have contracted Ebola while working in Liberia. Medical doctor Kent Brantly and Christian aid-worker Nancy Writbol were evacuated to the U.S. for treatment at Emory University Hospital in Atlanta, Ga.  Brantly and Writbol were declared virus free in late August and released from the Hospital.

Medical doctor Rick Sacra contracted Ebola in Liberia and is now being treated at the Nebraska Medical Center in Omaha, Neb.

There is also a fourth male U.S. citizen who contracted Ebola in Sierra Leone, who is now being treated at the Emory facility. The patient’s identity has not been made public.

Why has this outbreak lasted so much longer than previous outbreaks?

Previous Ebola outbreaks have been confined to small villages and limited geographic areas. The current outbreak affects large densely populated urban areas where the virus can spread more easily given the close proximity of people and their increased access to transportation.  According to the CDC, the largest number of reported cases associated with an Ebola outbreak prior to the West Africa outbreak was the 2000-2001 outbreak in Uganda where 425 people contracted the Ebola Sudan virus strand.

For additional information about Ebola and the current outbreak in West Africa please see:

Centers for Disease Control and Prevention