Schumer Calls for Trump’s Ouster by Impeachment or 25th Amendment 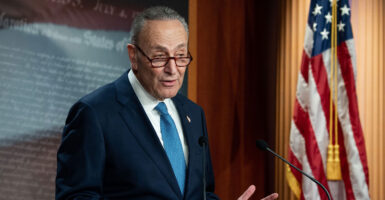 Senate Minority Leader Chuck Schumer, D-N.Y., seen here speaking at a press conference at the Capitol on Jan. 6, is calling for the removal from office of President Donald Trump, despite there being less than two weeks until the end of his term. (Photo: Saul Loeb/Agence France-Presse/Getty Images)

Senate Minority Leader Chuck Schumer, D-N.Y., on Thursday called for President Donald Trump to “immediately” be removed from office, either through invoking the 25th Amendment or through impeachment.

“What happened at the U.S. Capitol yesterday was an insurrection against the United States, incited by the president. This president should not hold office one day longer,” Schumer said in a public statement, referring to the mob of Trump supporters who stormed the U.S. Capitol on Wednesday as lawmakers were validating the results of the Electoral College vote.

Schumer urged Vice President Mike Pence and members of Trump’s Cabinet to invoke the 25th Amendment, which allows for the removal of a sitting president under certain circumstances.

“If the Vice President and the Cabinet refuse to stand up, Congress should reconvene to impeach the president,” Schumer said.

A group of House Democrats urged Pence on Wednesday to invoke the 25th Amendment. Rep. Adam Kinzinger, R-Ill., also called for Trump’s removal from office, becoming the first Republican to do so.

The House of Representatives impeached Trump on Dec. 18, 2019, following an inquiry into a phone call he had with Ukraine’s president in which Trump discussed Joe Biden and his son, Hunter.

The Senate, which was controlled by Republicans at the time, voted to acquit Trump on Feb. 5, 2020.

If successfully impeached and removed from office, Trump would be prohibited from holding any publicly elected office in the future.

Content created by The Daily Caller News Foundation is available without charge to any eligible news publisher that can provide a large audience. For licensing opportunities with this original content, email licensing@dailycallernewsfoundation.org.