Here’s the History of the 25th Amendment 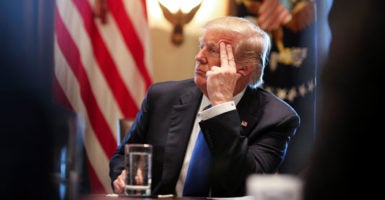 Editor’s note: This article was originally published in 2018.

After failing to gather any real momentum to impeach President Donald Trump, some Democrats are now floating the idea of using the 25th Amendment to oust him.

This little-known constitutional amendment serves as an escape-hatch measure for removing the president if he is incapacitated. It is quite different from impeachment.

Impeachment is the method that the Founders set up to prosecute cases of presidential criminality. It requires members of Congress to bring specific charges of “high crimes and misdemeanors.”

But absent these charges, some of Trump’s detractors are now embracing other methods to overthrow him.

>>> The Right Side of History: Here’s What You Need to Know About the Impeachment Debate

Anti-Trump commentators and the few Democrats now suggesting use of the 25th Amendment have suggested that the president is mentally unstable.

“The judgment [about the president’s mental state] is not mine to make,” Rep. Jamie Raskin, D-Md., said to reporters after proposing a commission to examine Trump’s mental health, according to Politico.

Pulling out the 25th Amendment is the logical next step for those who have been looking for a way to depose Trump since he entered office, though it’s a serious departure from the intent of those who passed the amendment.

Democrats have trotted out psychologists on Capitol Hill to prove that Trump is unstable and should be removed from office.

This alone seriously flirts with violating the “Goldwater Rule,” which prevents psychologists from offering a “professional opinion unless he or she has conducted an examination and has been granted proper authorization for such a statement.”

The American Psychiatric Association created this rule after Republican presidential candidate Barry Goldwater successfully sued a magazine that had published a survey of psychologists deeming him unfit for office.

The survey was misleading, clearly partisan, and damaged the reputation of psychologists as a profession. Moreover, the idea of removing a president based on the whims of an elite group of supposedly neutral neutral psychologists is an affront to democracy.

This is not to say the 25th Amendment doesn’t serve a valuable purpose. If a president suffers a disability that would make him unable to perform his duties, this tool is an emergency stopgap to solve the problem.

It was never conceived of as a partisan tool to depose a hated president.

Perhaps been the most obvious case where the 25th Amendment was needed occurred a generation before it was actually passed.

On Sept. 25, 1919, President Woodrow Wilson suffered a collapse and a massive stroke while campaigning in Colorado for the U.S. to enter the League of Nations.

The League of Nations, a precursor to the United Nations, had been Wilson’s pet project, and despite warnings from doctors he had pushed himself to the limit on its behalf.

After the stroke, Wilson went blind in one eye, was paralyzed on the left side, and lay unconscious. While he eventually awoke from the coma, he was never the same. For the most part, he was a barely-functioning invalid.

Incredibly, Wilson’s wife practically ran the White House for the two remaining years of his term, only leaving the most serious acts of policy and politics to her husband, which by that point he was barely able to perform.

“This is the worst instance of presidential disability we’ve ever had,” said historian John Milton Cooper. “We stumbled along [for eighteen months] … without a fully functioning president.”

Few around the country even knew that the West Wing was in such bad shape, as both the press corps and the White House carefully kept the truth of the president’s condition from coming out.

Wilson even considered running for what would then be an unprecedented third term, but Democratic Party leaders carefully selected a compromise candidate who would run instead.

While Wilson’s Cabinet and the Washington political establishment were wary about forcing the president out of office, many fretted about what could be done if a president couldn’t perform his duties in an emergency.

The debate went more or less dormant for half a century until the assassination of a president forced the nation to seriously reconsider legal ways of replacing—either temporarily or permanently—a president for health-related reasons.

While health scares for President Dwight Eisenhower led to some informal agreements about transmitting the duties of the president in a time of crisis, nothing was enacted until the assassination of President John F. Kennedy.

The line of succession had been laid out by the Presidential Succession Act, but some began a push to clearly define these ambiguous rules in the Constitution while also addressing what could be done if the president was alive but experiencing a sudden health crisis.

The idea of being without a functioning president, particularly in the rapid-response world of instant communication and the Cold War, concerned Americans in a way that it hadn’t in earlier times.

“In an age of nuclear weaponry—and now, global terrorism—America can ill afford to be leaderless for long, or to have unclear rules about who is in charge,” wrote constitutional scholars Akhil Reed Amar and Vikram David Amar.

“The 25th Amendment, proposed and ratified after JFK’s assassination, fills many of the gaps left open by the Founders.

The 25th Amendment, enacted in 1967, set up a clear line of succession in case the president or vice president died, and included the section that some anti-Trumpers are now looking to: the method for removing, or putting a pause on, the official powers of a debilitated president.

Whenever the vice president and a majority of either the principal officers of the executive departments or of such other body as Congress may by law provide, transmit to the President pro tempore of the Senate and the Speaker of the House of Representatives their written declaration that the President is unable to discharge the powers and duties of his office, the Vice President shall immediately assume the powers and duties of the office as acting president.

Congress then has 21 days to determine if the president is able to continue performing his duties and can remove him from office with a two-thirds vote in both houses.

Since its passage, the 25th Amendment has been used several times, but never for the purpose of removing the president from office.

Some have alleged that officials wanted to remove President Ronald Reagan from office using the 25th Amendment after his attempted assassination—but those allegations have been debunked.

The amendment has only been used to temporarily transfer power from presidents to vice presidents during medical operations that would leave them incapable of responding to an urgent crisis.

Reagan himself did invoke Section 3 of the amendment on himself during a routine medical procedure in 1985, in which Vice President George H.W. Bush assumed the powers of the presidency for several hours.

And President George W. Bush also used the law to transfer power to Vice President Dick Cheney during a couple of operations, again for only a few hours.

While some are now itching to use Section 4 of the 25th Amendment on Trump, many have urged caution or outright blasted the move as nothing but naked partisanship.

The Federalist’s Mollie Hemingway suggested that this overheated effort to boot the president with the 25th Amendment is akin to a “coup.”

“Talk of mental health and a 25th Amendment removal, ‘by force if necessary,’ is talk of a coup,” Hemingway wrote. “Responsible parties should consider how this is perceived by the part of the electorate they rarely speak to and cease.”

Yet this won’t stop left-wing activists from trying to wield this amendment as a weapon against the Trump presidency.

At least they’re arguing from the Constitution. If only they cared for its intent.