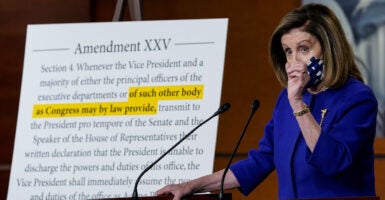 Speaker of the House Nancy Pelosi, D- Calif., introduced a plan Oct. 9 to introduce legislation based on the 25th Amendment that would create a commission to review a president's fitness for office. The move is a thinly-veiled attack on President Donald Trump, who is recovering from COVID-19. (Photo: Drew Angerer/Getty Images)

If necessity is the mother of invention, obsession is the weird uncle of crazy.

Leftists obviously do not want President Donald Trump in the White House. After the two methods of removing a president that the Constitution provides—the ballot box in 2016 and impeachment this year—failed, however, House Speaker Nancy Pelosi, D-Calif., wants to invent a new one. She has introduced a bill that she claims would allow Congress, acting under the 25th Amendment, to remove the president.

She should have read the 25th Amendment before pulling a stunt like this.

The 25th Amendment, ratified in February 1967, addresses presidential succession and disability in several specific circumstances. It was proposed in 1965, after the assassination of President John F. Kennedy revealed the need to prepare for a president’s incapacity as well as succession. Section 3 provides for the president, by a declaration that he is “unable to discharge the powers and duties of his office,” to transfer his authority to the vice president.

Presidents Ronald Reagan and George W. Bush, for example, made such a declaration (in 1985 and 2002, respectively) before undergoing minor medical procedures, transferring the reins of power to the vice president for the short time it took for the general anesthesia to wear off and for the president to recover.

This transfer of authority, however, is not automatically indefinite. If the president declares that he is fit for duty, and the same combination of the vice president and either Cabinet secretaries or members if an “other body” once again declare otherwise, Congress must step in. Unless two-thirds of the House and the Senate vote that the president remains incapacitated, he reclaims his authority and resumes the duties of his office.

Pelosi’s bill is co-sponsored by Rep. Jamie Raskin, D-Md., who introduced similar legislation (H.R. 1987) in 2017. That bill’s co-sponsors included half of the House members who would try to convict Trump in his Senate impeachment trial.

The Pelosi version would create a 16-member commission, with half of its members appointed by Republican and Democratic congressional leaders, to monitor the president’s fitness for office and, if necessary, play the role contemplated by the 25th Amendment.

Pelosi’s messages about her bill are mixed, to say the least. On the one hand, she says this is not specifically about Trump, but generally about the “stability of the presidency and the continuity of the office.” On the other hand, at the same time she introduced this “not about Trump” bill, Pelosi attacked the state of his health and claimed he has been in “an altered state” since testing positive for COVID-19.

Raskin similarly claimed that the bill has nothing to do with the 2020 election, but still insisted that “we must act” now.

Pelosi’s claims that this stunt is not about Trump invite the response from Shakespeare’s Hamlet: “The lady doth protest too much, methinks.”

This not-veiled-at-all attempt to engage Congress directly in the 2020 presidential campaign will only further degrade Americans’ opinion of Congress.