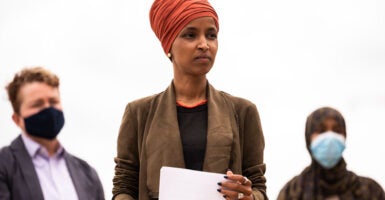 Minnesota Democratic Rep. Ilhan Omar (pictured here at an event in August) announced she was drawing up articles of impeachment against President Donald Trump after a mob of pro-Trump rioters stormed the Capitol building Wednesday. (Photo: Stephen Maturen/Getty Images)

Rep. Ilhan Omar, D-Minn., announced she was drawing up articles of impeachment against President Donald Trump after a mob of pro-Trump rioters stormed the Capitol building Wednesday.

“Donald J. Trump should be impeached by the House of Representatives & removed from office by the United States Senate,” Omar said.

“We can’t allow him to remain in office, it’s a matter of preserving our Republic and we need to fulfill our oath,” Omar added.

Omar’s fellow member of the so-called squad, Massachusetts Rep. Ayanna Pressley, joined in calling for Trump to be impeached by the House and removed by the Senate.

Hundreds of people stormed the Capitol building Wednesday afternoon after Trump told supporters during a speech earlier in the day he would lead a march to the Capitol building to “cheer on our brave senators and congressmen and women” challenging his loss to President-elect Joe Biden in the 2020 elections.

One woman who appeared to be wearing a pro-Trump flag was allegedly shot in the neck as rioters swarmed the Capitol building Wednesday afternoon. Four people, including a Trump female supporter, died Wednesday amid the riots.

The mob descended on the Capitol building as lawmakers were meeting to certify Biden’s election victory.