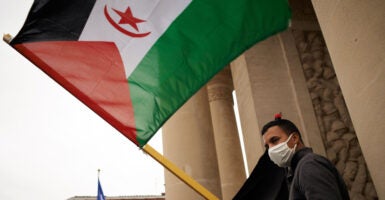 A demonstrator waves a Sahrawi flag in Toulouse, France, on Dec. 19 against the recognition by Israel of the sovereignty of Morocco over the Western Sahara and its inhabitants, the Sahrawis, in exchange for a normalization of relations between Israel and Morocco nine days earlier. (Photo: Alain Pitton/NurPhoto/ Getty Images)

Morocco agreed on Dec. 10 to resume formal diplomatic relations with Israel, joining the United Arab Emirates, Bahrain, and Sudan as the fourth Arab country to do so in recent months at Washington’s urging.

The Morocco-Israel warming is another positive development for the cause of peace between Israel and the Arab states.

Morocco can benefit from trade and other economic engagements with Israel, the Middle East’s most vibrant and sophisticated economy, and the two can cooperate on counterterrorism issues of mutual concern.

The Israeli state’s legitimacy is further affirmed by Moroccan recognition, and the deal will boost Arab-Israeli unity against Iran.

In exchange for Morocco’s shift on Israel, the U.S. recognized Rabat’s sovereignty over the disputed Western Sahara region, a former Spanish colony claimed by Morocco as part of its pre-colonial territory.

The International Court of Justice in 1975 rejected that claim in a nonbinding decision that held that the pre-colonial ties between the two entities did not constitute sovereignty.

The Moroccans responded to the decision by organizing the Green March of hundreds of thousands of Moroccans into the Western Sahara.

The Spanish fully withdrew shortly thereafter, and the Polisario Front—an armed group supported primarily by neighboring Algeria, but also previously by Cuba, the then-USSR, and Libya—led a sharp insurgency against the Moroccans that ground on for well over a decade.

The U.N. mediated a cease-fire in 1991 that largely ended the fighting, but a series of negotiations since then have failed to resolve the outstanding issues due to episodic intransigence on both sides.

The two sides today are physically separated by a Moroccan-built berm that runs the length of the territory. It separates the Polisario-controlled east, which the Polisario declared the Sahrawi Arab Democratic Republic—currently recognized by the African Union and about 50 countries (down from a high of about 80)—while Morocco controls the western side.

Since 2007, the U.S. has supported as “serious, realistic, and credible” Moroccan plan that would grant Western Sahara autonomy while affirming Rabat’s sovereignty. A bipartisan group of 233 members of the U.S. House of Representatives publicly supported the autonomy plan in 2009, as did a bipartisan group of 54 U.S. senators in 2010.

President Donald Trump’s recognition of Moroccan sovereignty has caused a furor, in part perhaps because of the confusing way Washington and the U.N. have tried to walk a tightrope on the contentious issue.

The U.S. State Department favors the Moroccan autonomy proposal as a worthwhile, potential option for resolving the conflict. Yet that position does not preclude the possibility that the U.S. would support an independence referendum if it could be achieved in a “peaceful, sustainable, mutually agreed-upon” manner.

The U.S. is also careful to voice support for the U.N. negotiations on the conflict. The U.N. position calls for a “mutually acceptable political solution, which will provide for the self-determination of the people of Western Sahara.”

The U.S.’ delicately calibrated position stops short of supporting Moroccan sovereignty of the Western Sahara, but signals that it is Washington’s preferred formula.

However, State Department officials have also at times declared that Sahrawi independence “is not a realistic option” and that an autonomous Western Sahara under Moroccan sovereignty is the “only realistic way forward.”

That formulation does preclude support for an independence referendum.

A plain reading of the House and Senate letters shows that they also reflect this understanding of U.S. policy, respectively proclaiming, “We remain convinced that the U.S. position, favoring autonomy for Western Sahara under Moroccan sovereignty, is the only feasible solution,” and that “it has been the policy of the United States to support a resolution of this conflict based on [the Moroccan autonomy plan].”

Furthermore, the same U.N. resolutions that reaffirm the call for an independence referendum also laud Moroccan efforts to resolve the dispute as “serious and credible.” In 2008, the U.N.’s mediator on the Western Sahara further muddied the waters by declaring that Sahrawi independence was “not a realistic proposition.”

So, Trump’s recognition of Moroccan sovereignty is a break from U.S. official policy that left the door ajar for an independence referendum, but it is also taking action on an approach that the U.S. government has favored for 13 years across four administrations, and at times has explicitly stated is the only possible way forward.

It is unclear what the practical effect of the announcement will be. There is no indication that other countries will follow the American lead. It is unlikely that Morocco will try to wrest control of the eastern part of the territory from the Polisario, nor is sparking such a war something Washington would welcome.

The Polisario could revive its military campaign—it had already declared last month that the 1991 cease-fire was dead—but, absent a Moroccan provocation, doing so would likely cost the Polisario its already dwindling international support. (In 2016, 28 African countries called for the Sahrawi Arab Democratic Republic to be expelled from the African Union.)

The Western Sahara conflict is a difficult, contentious issue that, regrettably, is unlikely to be resolved soon. However, we all can applaud another step toward Arab state peace with Israel that Morocco’s recent action represents.