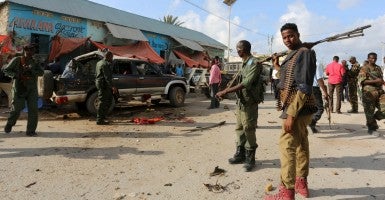 Somali policemen gather near the wreckage of a car at the scene of an explosion following an attack in Somalia's capital Mogadishu, March 9. (Photo: Feisal Omar/Reuters/Newscom)

Kenyan police announced this week that they had arrested a man interning at a Kenyan hospital who was planning a major anthrax attack on the country. Police in neighboring Uganda arrested two alleged accomplices, and Kenyan police are still searching for two others they claim were involved in the plot.

Authorities believe the man, Mohammed Abdi Ali, is part of an Islamic State-linked East African terror network that has been radicalizing East Africans and facilitating their travel to Libya, Iraq, and Syria, where the Islamic State, also known as ISIS, is most active.

Not enough information has been released to determine how serious the plot was. There have been no reports that any anthrax was recovered, and it is unclear if Ali had access to the dangerous substance. We also do not know how strong his links were to ISIS. Moroccan authorities have warned previously that ISIS is trying to build biological weapons , as well as launch a chemical attack in Europe as it has already done in Iraq and Syria.

ISIS also developed official support in East Africa for the first time late last year. Abdiqadir Mumin, a senior official in al-Shabaab—a prominent al-Qaeda-aligned terrorist group in Somalia that has networks throughout East Africa—and 20 of his followers declared allegiance to ISIS in October 2015.

Alarmingly, a former senior Somali intelligence official claims that the number of ISIS fighters has swelled since then to 150 today, and says they are receiving weapons and supplies from ISIS through nearby Yemen.

There have been other signs of ISIS’ presence in the region. In April, ISIS claimed its first attack in Somalia—a bombing of a vehicle belonging to the peacekeeping mission in the country. Two weeks later, it claimed a second attack, this time on Somali government troops. Also in April, a different group calling itself “Jahba East Africa” pledged itself to ISIS. Nothing has been heard from it since, however, so it may exist in little more than name only at the moment.

ISIS still faces significant hurdles in Somalia. The Somali government claims its commandos recently overran an ISIS training camp in southern Somalia. Al-Shabaab also remains entrenched in the country, and ISIS’ repeated overtures to al-Shabaab to forsake its affiliation with al-Qaeda and join ISIS have been rebuffed. In fact, al-Shabaab has hunted down and killed a number of its fighters who were agitating for the group to switch allegiances. It appears the pro-ISIS faction inside al-Shabaab is mostly comprised of younger fighters, while the older leadership, including al-Shabaab’s emir, Ahmad Umar, is determined for now to remain in the al-Qaeda fold.

Al-Shabaab could shift allegiances if it believed ISIS was a better deal, but that is unlikely at the moment. The group would probably have made the jump earlier if it was going to, when ISIS was at its zenith rather than now when it is suffering setbacks in Iraq and Syria. The war in Yemen has also revived al-Qaeda in the Arabian Peninsula, historically al-Shabaab’s strongest link to al-Qaeda, giving the Somali terrorists even more incentive to remain with al-Qaeda.

ISIS’ apparent growing strength in East Africa is of deep concern whether or not al-Shabaab switches over. ISIS’ presence likely portends increased radicalization and more terrorist attacks in a fragile region already unable to suppress al-Shabaab’s violence. The war against terrorism in East Africa may well be entering an even deadlier phase.