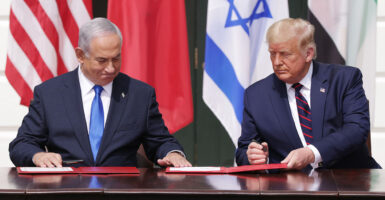 Though there are no guarantees in the Middle East, President Donald Trump's Abraham Accords make an Israeli-Palestinian deal possible. Pictured: Prime Minister of Israel Benjamin Netanyahu and Trump participate in the signing ceremony of the Abraham Accords on the South Lawn of the White House Sept. 15 in Washington, D.C. Witnessed by Trump, Netanyahu signed a peace deal with the United Arab Emirates and a declaration of intent to make peace with Bahrain. (Photo: Alex Wong/Getty Images)

After Israel’s resounding victory over the Egyptian, Jordanian, and Syrian armies in 1967, the Jewish state again offered the Arab world peace in exchange for recognition. And it was again rebuffed.

Instead, the Arab League convened in Khartoum to formulate a consensus response that became known as “The 3 Noes”—no recognition, no negotiations, and no peace with Israel.

Indeed, three years before Israel had ever attained its “occupied” territories in the West Bank, the Arab League had already created and funded the Palestine Liberation Organization, a nationalist terror group that would not only operate within Israel but develop the tactics that would subsequently be adopted by Islamists around the world.

Arab states, including those in Gulf, would support and fund this violence against Jewish civilians for decades.

Fast-forward to 2020. Earlier this month, the Palestinians, who had held veto power over Arab foreign policy for years, demand nothing less than a full condemnation of the Israel-United Arab Emirates normalization. The Arab League gave them nothing.

Instead, a couple of weeks later, Prime Minister Benjamin Netanyahu of Israel, Foreign Minister Sheikh Abdullah bin Zayed Al Nahyan of the United Arab Emirates, and Foreign Minister Abdullatif Al Zayani of Bahrain all came to Washington to sign the Abraham Accords, in which all three promised to “to take the necessary steps to prevent any terrorist or hostile activities against each other on or from their respective territories, as well as deny any support for such activities abroad or allowing such support on or from their respective territories.”

It takes only a rudimentary knowledge of modern Middle East history to comprehend the immense changes going on in the region—and yet this seems lost on many contemporary journalists.

There are likely a number of reasons that normalization deals between Israel and Arab nations haven’t received the attention and praise they deserve.

The first is the most obvious: Few in legacy media want to credit Donald Trump—certainly not during a presidential campaign. Had Barack Obama facilitated a deal between Israel and any Arab nation, it would have dominated coverage. Rightly so.

Many reporters, think-tankers, and D.C. foreign policy experts are part of a hive mind in which the word “peace” means little more than the creation of a Palestinian state and an embrace of Iran.

And Washington’s foreign policy consensus has taken a body blow. In four years, Jared Kushner has done more to advance the cause of peace in the Middle East than the entire Brookings Institution foreign policy team has in a lifetime.

The John Kerrys of the world have long argued that wider peace would not be possible without acquiescing to the Palestinians first. They were wrong.

After the Trump administration moved the American Embassy to the Israeli capital of Jerusalem, the same people warned that an eruption of violence would envelop the Middle East. They made the same claim after Trump assassinated Qasem Soleimani. Wrong. And wrong, again.

The Abraham Accords also laid to rest the myth that Israel would find itself in “deepening international isolation” if it failed to heed Obama’s efforts to create a Palestinian state. The Abraham Accords offer considerable economic benefits for all sides.

Israel is already a major investment destination, and it now has economic ties to increasing numbers of prosperous Arab nations. A Dubai-based port operator has already reportedly partnered with an Israeli firm to bid on the largest shipping hub in Israel.

The Boycott, Divestment, and Sanctions movement and other economic boycotts of Israel are now little more than anti-Semitic outlets for Western radicals.

Perhaps most important, the Abraham Accords may just be the beginning of the thawing. Trump says he expected Saudi Arabia—the steward of Islam’s holiest sites—to recognize Israel. “At least five or six” other countries may as well, Trump says. We’ll have to see about that.

But Saudi Arabia has announced that it will permit commercial flights from Israel to pass through its airspace. Bahrain would never have agreed to a deal with Israel without the Saudis’ blessing. These deals only make more normalization possible.

Though there are no guarantees in the Middle East, these deals make an Israeli-Palestinian deal possible. Kushner approached Palestinian leadership to engage in these talks, and he was rebuffed. Mahmoud Abbas is waiting out Trump for a more friendly administration.

Since the early 1990s, every attempt to create a lasting agreement in the region has been bogged down by intractable Palestinian demands to make Jerusalem their capital and force Israel to accept the suicidal “right of return.”

These are nonstarters. This isn’t merely a Likud position; it is the position of every major party in Israel and, increasingly, a reality accepted in the wider Arab world.

The Abraham Accords, for example, pledge to deal with Palestinian issues in a manner that “meets the legitimate needs and aspirations of both peoples, and to advance comprehensive Middle East peace, stability, and prosperity.”

Nowhere does it mention anything about handing over Jerusalem, a right of return, reinstituting 1967 lines, or even a Palestinian state.

The decades of Middle East policy being conducted through the grievances of the Palestine Liberation Organization are likely over. Without obligatory backing from the Arab world, Palestinians may be forced to embrace reality, too. If not, they’ll continue to be left behind.