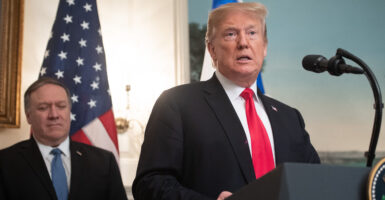 “Had I kept that [Iran] deal, we could never have started this incredible thing that’s happening with UAE [and] Israel," President Donald Trump told a conservative policy group Friday. Pictured: Trump speaks about the Middle East alongside Secretary of State Mike Pompeo on March 25, 2019, at the White House. (Photo: Saul Loeb/AFP/Getty Images)

Days after announcing a push to reimpose international sanctions on Iran, President Donald Trump said the country known as the world’s chief state sponsor of terrorism is facing a shelled economy because the U.S. withdrew from the nuclear deal with Iran crafted by the Obama administration.

“They don’t have so much money now,” Trump said of Iran in a speech Friday to the Council for National Policy, a conservative group, in Arlington, Virginia.

“They are not spending billions of dollars giving it to al-Qaeda, Hezbollah, all these groups that are terribly vicious lunatics. Iran is different,” Trump said. “They are having a hard time. Its GDP [gross domestic product] went down to a level you wouldn’t believe, in the 20s.”

Trump then talked about the agreement his administration brokered earlier this month to normalize relations between Israel and the United Arab Emirates. He said that only by withdrawing from the Iran deal did he have the leverage to work with other Arab countries for peace in the Middle East.

“Had I kept that deal, we could never have started this incredible thing that’s happening with UAE [and] Israel and everybody saying, ‘Why haven’t you invited us?’” Trump said. “Many countries want to come in. This was an impossible thing even to consider.”

Trump announced Wednesday that the administration is seeking to invoke the “snapback” provision of the Iran nuclear deal. Formally known as the Joint Comprehensive Plan of Action, it is a multilateral plan crafted with Iran by the Obama administration along with the United Kingdom, France, Russia, China, and Germany.

The deal lifted international sanctions on Iran if the Islamist regime agreed to delay development of nuclear weapons.

Trump withdrew the United States from the deal in 2017.

However, with the U.S. a member of the United Nations Security Council and an original party to the deal, Trump seeks to invoke a provision that would snap sanctions back into place for Iran’s violations of the agreement’s terms.

France, Britain, and Germany issued a statement Thursday opposing the Trump administration’s proposal, however, noting that the United States had withdrawn from the deal.

The agreement was not a treaty ratified by the U.S. Senate.

It wasn’t even a long-term deal. Right now, the time is almost up. This was like if you rent a store in a shopping center. These are countries we’re dealing with. You need length. But it was a short-term deal. More importantly, we gave the [Iranian regime] $1.8 billion in cash. Think of that, cash. Flew in in a Boeing 757, loaded from floor to ceiling with cash. I terminated that deal.

Obama turned over $400 million plus $1.3 billion in interest payments, in cash, the day after Iran released U.S. hostages.

Trump also touted his administration’s accomplishments against the brutal Islamic State terrorist group, or ISIS, that emerged in Iran and Syria while his predecessor was president.

“If you look at the Obama administration, ISIS was rampaging all over. I’ve defeated the ISIS caliphate,” Trump said.