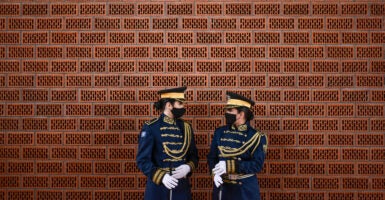 The National Guard's State Partnership Program matches state National Guards with America’s allies and friends around the globe. The program currently has 85 partnerships with more than 90 nations, including Romania, Uzbekistan, Paraguay, and Kosovo. Pictured: Members of the Kosovo Security Force attend a ceremony March 9, 2021, before their first deployment in an international peacekeeping mission, serving under the command of the National Guard of Iowa. (Photo: Armend Nomani/AFP/Getty Images)

“It’s a process. A process among friends.”

It’s truly encouraging that the State Partnership Program has been growing over the past decades. The program started in the wake of the fall of the Soviet Union and continues to generate measurable benefits to partnerships around the world. Also notable is that the program has trained America’s like-minded and willing partners to build the aptitude to qualify for the membership of the North Atlantic Treaty Organization.

The State Partnership Program, which began with 13 partnerships in 1993, currently has 85 partnerships with more than 90 nations, including Romania, Uzbekistan, Paraguay, and Kosovo, with the National Guards in all of America’s states and territories, including the District of Columbia, partaking in the program.

In fact, these kind of real, pragmatic, state-level partnerships merit going far beyond the security cooperation dimension, and they should more than ever.

The ongoing pandemic has highlighted the necessity of pursuing practical ways to promote economic freedom, including more initiatives at the state level that engage the private sector in America’s strategic priorities consistent with free market practices, which will in turn reinforce and further nourish the already established state-level engagements.

For example, Switzerland and the United States have been connected through a high volume of cross-border investments that account for more than $300 billion. The United States is the small alpine country’s most important destination for foreign direct investment, more so than Germany, France, Italy, and the United Kingdom combined. More specifically, over 60 Swiss companies are currently located in Florida, heating up the economy of the Sunshine State and supporting over 35,000 jobs.

From a broader policy perspective, encouraging America’s allies to engage with 50 states requires enhancing America’s competitive economic dynamism through polices that keep U.S. markets open and attractive. Indeed, now is not the time to slow and delay the much-needed economy recovery by employing more protectionist trade and investment policies triggered by the COVID-19 pandemic.

If there was ever a time to adhere closely to the principles of economic freedom, this is it. Any notion that America can deal with the ongoing pandemic and make the economic recovery stronger and faster without access to international investment and trade flows is wishful thinking.

The Heritage Foundation’s Index of Economic Freedom has demonstrated for more than 25 years that economic openness yields better results for individuals around the world.

The same is quite applicable for America’s 50 states that reduce barriers to economic activities and allow entrepreneurs and companies to exchange freely with the world.

U.S. engagement with the world through trade and investment has been the framework upon which its prosperity rests. On that note, America’s 50 states should take a more practical, strategic look at the countries that have indicated a willingness to forge closer trade partnerships with the United States.

Implementing such forward-looking policies would generate and reinforce the economic dynamism and innovation at home and abroad that will lead to an expanded network of free markets and greater economic ties with the like-minded partners of the U.S.

In what must be a long-term, strategic effort, now is time to marshal America’s greater security and economic engagements with its willing allies at the state level.