Building an Even Better US-Swiss Relationship 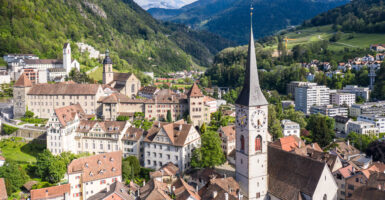 The United States and Switzerland have a proven record of a dynamic partnership on many critical issues. President Joe Biden and Swiss President Guy Parmelin should work on a free trade agreement when they meet this week. (Photo: Didier Marti/Getty Images)

Following the NATO summit, President Joe Biden will continue his European trip with a visit to Geneva, where he will meet Russian President Vladimir Putin, but also hold bilateral talks with his Swiss counterpart, President Guy Parmelin.

The United States and Switzerland have a proven record of a dynamic partnership on many critical issues, and the country, despite its small size, is highly influential on a variety of economic and strategic issues.

Switzerland is one of the most advanced and capable free market economies. According to The Heritage Foundation’s annual Index of Economic Freedom, which measures the entrepreneurial environments of 180 economies around the world, Switzerland, the world’s fourth-freest economy, tops the rankings in Europe.

Switzerland and the United States have made great strides in deepening economic and business ties. The Alpine country is the 12th-largest trading partner of the United States, with a roughly balanced exchange of goods and services amounting to over $100 billion annually.

American and Swiss companies produce cutting-edge and high-quality pharmaceuticals, aerospace components, machinery, and equipment that flow in both directions and make the two economies more productive and competitive.

The United States and Switzerland have long been described as “Sister Republics,” which symbolizes the deep and wide U.S.-Swiss relationship. Reflecting that unique relationship, Swiss Ambassador to the U.S. Jacques Pitteloud highlighted:

Close diplomatic ties have further shaped the unique relationship between the two nations. Switzerland has a long tradition of representing the United States’ interests abroad, which is proof of a long-standing mutual trust and a fruitful relationship.

In that regard, it is regrettable that the United States has not responded positively to Switzerland’s proactive interest in pursuing a bilateral free trade agreement. Such an agreement need not seek to regulate every aspect of the economic relationship, as have other recent trade pacts, like the U.S.-Mexico-Canada Agreement.

Switzerland and the U.S. have similar values and standards in regulatory matters and respect for human rights.

It makes sense, instead, to prioritize an innovative trade pact with Switzerland. Rather than requiring hundreds of pages to institutionalize a comprehensive trade and investment pact, an agreement could be straightforward, simple, and streamlined, lowering tariff and non-tariff barriers and removing as many impediments to trade as possible.

A deeper trade relationship offers economic benefits for both countries. Biden and Parmelin should not squander this week’s opportunity to bring that about.