GOP Wins Big in State Capitals. What It Means for the Next Decade. 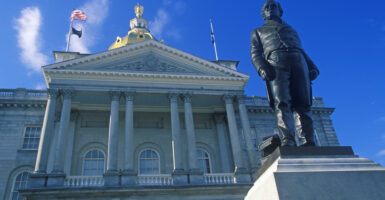 The state Capitol in Concord, New Hampshire, will be run by Republicans in 2021 after the GOP flipped control of both houses of the legislature on Nov. 3. (Photo: Joe Sohm/Visions of America/Universal Images Group/Getty Images)

In Ohio’s 75th House District, Gail Pavliga won her election, flipping the seat to the GOP after running a campaign on solving the opioid crisis in the district.

Delrosso and Pavliga were among the many victories the GOP is citing as part of Republicans’ general down-ballot success Nov. 3, when the party held onto majorities in all 59 legislative state chambers it controlled going into the election, while winning state House and Senate majorities in New Hampshire and flipping the Alaska House of Representatives.

While those races were lower profile than the battles for control of the White House and Congress, they could be most consequential for the next 10 years, not only in drawing redistricting maps, but also in setting agendas in state capitals.

“We had one of the most diverse slates of Republican candidates that has ever been elected,” Dave Abrams, deputy executive director of the Republican State Leadership Committee, told The Daily Signal. “It’s really remarkable that, to my no surprise, the [media have] not really written much about [it]. Had it been the inverse for Democrats, it would have been on the cover of Time already.”

In what was projected to be a good year for Democrats from the top of the ballot on down, the GOP defied conventional wisdom in part by running local races for local offices, while even Democrats running for state legislatures sought to make their races a referendum on President Donald Trump, Abrams said.

“We know that, at the state level, Democrats ran nationalized campaigns, with socialist agendas. It didn’t work,” he said.

“When they were talking about issues like defunding the police, supporting the Green New Deal, and basically running opposition campaigns to President Trump, who was at the top of the ticket, I think it made it more clear the policies Republicans were focused on—getting economies moving again and recovering from the impact of the coronavirus,” Abrams said.

“We are for expanding police funding to keep America safe. Those are local issues, all the way down to traffic, broken street lights, and potholes. Our strategy in keeping things local paid off enormously everywhere.”

Abrams declined, however, to characterize his party’s strong Nov. 3 performance as a state-level red wave.

“It certainly was a historically successful year, especially when you put it into context of what state Republicans were up against from the other side, in terms of money and the political environment and dynamics that shifted because of the coronavirus,” Abrams said, adding:

When you add all that in, conventional wisdom was that we were going to lose everywhere, and we ended up losing zero chambers of the legislatures. I’ll call it a historically successful year and an embarrassing colossal failure for the Democrats.

New Hampshire, a battleground state, will now have a Republican trifecta, with GOP Gov. Chris Sununu and control of both houses of the Legislature. It was an unusual result, since former Vice President Joe Biden, a Democrat, won New Hampshire’s four electoral votes for president.

The New Hampshire Legislature will control the decennial redistricting, drawing the congressional and state legislative redistricting maps following the 2020 census.

However, Democrats are in a better spot going into 2021 than they were in 2011, controlling more legislative chambers or governorships than 10 years ago, thus forcing compromise on redistricting. Also in 2011, the GOP had full control over redrawing the maps in New Mexico, Nevada, Maine, and Oregon. That’s no longer the case.

Further, Democrats were able to announce supermajorities in the legislatures of three states—New York, Delaware, and Connecticut—after big wins there from election night. But those are all legislatures where the party already held majorities.

The Democratic Legislative Campaign Committee acknowledged receipt of an email inquiry from The Daily Signal, but did not immediately respond to phone and email inquiries for this article.

In a USA Today op-ed, Democratic Legislative Campaign Committee President Jessica Post sought to put a positive spin on the outcome, while conceding, “There’s no doubt that down-ballot Democrats generally fared poorly in 2020.”

She noted success in the past decade with Democrats winning control of legislatures in four states. Over that same time, the party also took back governorships in Kansas, Wisconsin, Kentucky, Pennsylvania, Louisiana, and Michigan.

“Democrats will have profoundly greater influence over redistricting heading into this decade than we did the last, and voters in many states will be drawn into fair, non-gerrymandered districts for the first time in a generation,” Post wrote in the op-ed.

Progressive groups, such as All on the Line, run by former Attorney General Eric Holder, and Forward Majority, spent heavily on states in 2020 in an attempt to cement Democratic majorities at the state and congressional levels. Republicans were outgunned financially, as liberal groups poured some $200 million into flipping state legislatures to Democrats, Abrams said.

“In redistricting years, this being one of them, our main priority is to win the legislative seats and legislative majorities where the legislature plays a large—if not the sole—role in the redistricting process for the benefit of preventing opportunities for liberals to gerrymander themselves into near-permanent majorities, both at the state and congressional level,” he said.

The progressive groups were targeting the states of Arizona, Colorado, Florida, Georgia, North Carolina, Ohio, Pennsylvania, Texas, and Wisconsin, but to no avail.

“When you look at states like Texas and North Carolina, where large populations will gain congressional seats through reapportionment in the year to follow, obviously, quite a bit was at stake,” Abrams said. “So, obviously, that’s a key focus of ours, and we were successful in preventing Democrats from rigging a lot of these maps.”