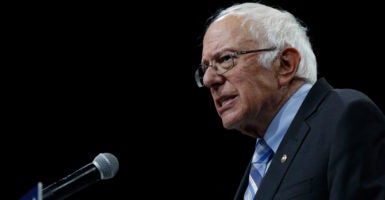 The central planning policies at the heart of the Green New Deal, which is championed by Sen. Bernie Sanders, I-Vt., among others, have a horrible track record for the environment. (Photo: Joshua Lott/Getty Images)

We’re not hearing much about the Green New Deal these days, but it’s still a priority for some candidates, as anyone who’s attended a recent Bernie Sanders rally can attest.

Criticism of the Green New Deal tends to center on cost and rightly so. It would be extremely expensive. Researchers estimate it would take more than $5 trillion just to switch from coal, nuclear, and natural gas to 100% renewables.

But even if you set economic concerns aside, an ironic fact remains: In the United States and around the world, the central planning policies at the heart of the Green New Deal have a horrible track record for the environment.

Governments in countries such as Venezuela and China (or in the past like the Soviet Union and Cuba) either routinely mismanage and waste resources or ramp up production with little to no accountability for environmental damage that comes with it. The absence of price signals reduces the incentive to be more efficient and do more with less.

In addition, the absence of property rights reduces the incentive to conserve and gives government-controlled industries a free pass to pollute without compensating or protecting its citizens.

The Green New Deal would massively expand the size and scope of the federal government’s control over activities best left to the private sector. It would empower the feds to change and control how people produce and consume energy, harvest crops, raise livestock, build homes, drive cars, and manufacture goods.

Secondly, the Green New Deal would result in a number of unintended consequences. For instance, policies that limit coal, oil, and natural gas production in the United States will not stop the global consumption of these natural resources. Production will merely shift to places where the environmental standards are not as rigorous, making the planet worse off.

Moreover, it’s not as if wind, solar, and battery technologies magically appear. Companies still have to mine the resources, manufacture the product, and deal with the waste streams.

There are challenges to disposing potentially toxic lithium-ion batteries and solar panels, or even wind turbine blades that are difficult and expensive to transport and crush at landfills. While these are solvable problems, they’re seldom discussed by Green New Deal proponents.

There would also be massive land use changes required to expand renewable power. Ben Zycher at the American Enterprise Institute estimates that land use necessary to meet a 100% renewable target would require 115 million acres, which is 15% larger than the land area of California.

Two recent National Bureau of Economic Research papers underscore the unintended consequences of energy policy on human well-being. One found that cheaper home heating because of America’s fracking revolution is averting more than 10,000 winter deaths per year. The Green New Deal would wipe all of that away, and reverse course by mandating pricier energy on families.

Another paper found that the Japanese government’s decision to close safely operating nuclear power plants after Fukushima increased energy prices and reduced consumption, which consequently, increased mortalities from colder temperatures. In fact, the authors estimate that “the decision to cease nuclear production has contributed to more deaths than the accident itself.” Unintended consequences.

Another hallmark of bad environmental policy is focusing on outputs, not outcomes. According to the frequently asked questions sheet released along with the Green New Deal, it is “a massive investment in renewable energy production and would not include creating new nuclear plants.”

One would think that if we only have 11 or 12 years to act on climate change, we’d want to grab the largest source of emissions-free electricity we can get. But that’s not the case.

That’s typical for most big-government environmental policies: They’re so focused on prescriptive ways to control peoples’ behaviors that they crowd out or ignore opportunities for innovative solutions.

The reality is that environmental policies aren’t good for the environment if they’re so bad for people. The costs of the Green New Deal would be devastatingly high for households. Government policies that drive up energy bills are not only very regressive, but they would also harm consumers multiple times as they pay more for food, clothes, and all of the other goods that require energy to make.

By shrinking our economy by potentially tens of trillions of dollars, the Green New Deal will cause lower levels of prosperity and fewer resources to deal with whatever environmental challenges come our way. That’s a bad deal for our economy and our environment.