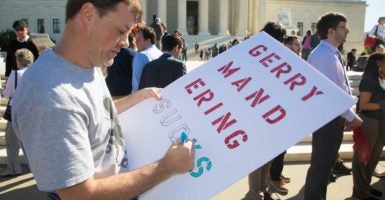 You can’t take politics out of politics.

In different words, that’s what James Madison, the Father of the Constitution, expressed when he wrote Federalist No. 10. Instead of eliminating partisan interests, he called for a constitutional system that would pit ambition against ambition to prevent tyranny, rather than trying to extinguish parties or “factions” altogether.

But the age-old desire to create a political system free from rank partisanship threatens to make our governing system worse, not better.

There’s no better illustration of Madison’s wisdom than the current battle over how legislative districts are drawn.

A lower court threw out a 2011 Wisconsin redistricting plan on the basis that the number of Republican- and Democrat-held seats did not reflect the number of total votes for each party in the state. Instead, the seats were skewed to favor the GOP. The issue made its way up to the Supreme Court, which recently heard oral arguments in the case of Gill v. Whitford.

Undoubtedly, as parties have done since the beginning of time, Republicans in the state Legislature drew up congressional districts that were favorable to their party, leading to complaints of injustice.

Though many have cried foul over this practice and now hope the courts will somehow resolve the issue, the judicial cure could become far worse than the disease.

Heritage Foundation expert Hans von Spakovsky warned about how the case could allow courts to be weaponized and injected into partisan political squabbles.

Von Spakovsky wrote in an op-ed essay for the Milwaukee Journal Sentinel, “If the court decides a ‘proof of intent to act for political purposes’ in redistricting is unconstitutional, they will be turning the courts into just such weapons and usurping the authority of the political branches of government.”

Like Madison, von Spakovsky would rather brave the messy political arena on this issue, as Americans have done throughout our history, rather than interject the courts in a matter that ought to be resolved through democratic means.

Even the colloquial name of the practice shows that getting one-up on the opposing party through redistricting is as old as the republic.

Partisan redistricting, called “gerrymandering,” gets its name from Elbridge Gerry, a curmudgeonly Founding Father from Massachusetts, who, as governor of his state, helped draw up district lines that favored his political allies.

One absurdly shaped district looked like a salamander, which his political opponents mocked by calling it a “gerrymander.” Gerry lost his next election, but the name of his partisan districting methods stuck.

It’s been a part of the American system before and since Gerry cooked up his scheme, with the party on the short end of the stick often squawking about its unfairness.

It just so happens that Democrats have been on the short end of this process after several wave elections that did not go in their favor.

Former President Barack Obama’s first attorney general, Eric Holder, has begun beating the drum, calling for the Supreme Court to end gerrymandering, or, if that fails, passage of  legislation to somehow make the system free from partisanship.

In a Washington Post column, Holder wrote that this was necessary for “preserving our democracy and making our government accountable to the people.”

Having nine unelected judges save democracy is perhaps itself an absurdity, but Holder’s other suggestions if the court doesn’t go his way also fall far short of improving the American system of elections.

This isn’t the first time Americans have sought to remove politics from redistricting. For instance, California passed a law in 2008 creating a California Citizens Redistricting Commission that was billed as balanced, scientific in method, and nonpartisan.

But the effort was almost immediately re-embroiled in politics as Republicans accused Democrats of stacking the commission with activists who were operating publicly as nothing more than disinterested citizens groups.

Also, in 2012, controversy raged in Colorado over partisanship in a supposedly independent commission set up by the state in the 1970s. One longtime member of the commission spoke out and said that it had always been partisan.

Robert D. Loevy, a retired professor and former Colorado redistricting commissioner, wrote in his book “Confessions of a Reapportionment Commissioner” that the independent commission guidelines for fair apportionment were essentially a “sham.”

Politicking persisted as parties tried to stack or manipulate the commissions to suit their interests, just as they had used their power to create more favorable districts through gerrymandering. The process just became less apparent on the surface and further out of the view of the public.

Other states have tried similar “fixes,” and yet, despite proliferating “nonpartisan” and “citizen” commissions and panels, redistricting generally remains as partisan as ever.

Does this mean gerrymandering isn’t a problem? Certainly not. There are undoubtedly districts across the country that are absurdly constructed and brazenly partisan, and do a poor job of reflecting the opinions and will of voters.

Instead of a Sisyphusian attempt to cut politics out of an inherently political activity, the problems engendered by partisan redistricting are best resolved through frequent elections, public awareness, and constant changes to policy, neighborhoods, and culture that often make carefully drawn legislative maps outdated.

Democracy and, yes, open partisanship, are perhaps the best and only means to counteract overzealous factions, not “legislators” in robes or ineffectual legislative schemes that can’t overcome the reality of raw political interest.