Who Has the Last Word When It Comes to Redistricting? 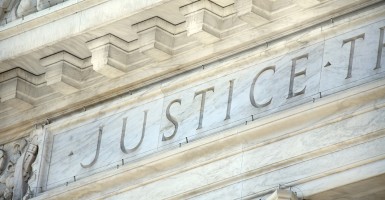 The Supreme Court heard a vigorous debate today over who ultimately has the constitutional authority to determine where the boundary lines are drawn for congressional districts.

At issue is the meaning of the 44 words contained in Art. I, Sec. 4, Cl. 1 of the Constitution. That provision, known as the Elections Clause, provides that:

The Times, Places and Manner of holding Elections for Senators and Representatives, shall be prescribed in each State by the Legislature thereof; but the Congress may at any time by Law make or alter such Regulations, except as to the Places of chusing Senators.

In 2000, Arizona voters approved a proposition that “permanently divests” the authority of the state legislature to engage in redistricting as Clement told the Court, and transferred it to an independent redistricting commission with five members. The only participation in the redistricting process that was left to the legislature was the ability to pick four of its five commissioners, but only from a list prepared by a nominating committee composed of state judges, and to comment on the maps produced by the commission (comments with no legal effect).

This case revolves around the definition of “Legislature” in the Elections Clause. The Constitution gives the authority to the “Legislature” of “each State” to determine the time, place and manner of congressional elections, unless Congress itself steps in to impose its own regulations.  The Arizona state legislature argued in its brief that the term “Legislature” is “clear and explicit and has an unambiguous meaning repeatedly recognized by the Framers and this Court: the representative lawmaking body of a State.”

Thus, a referendum cannot constitutionally deprive a state legislature of all of its authority over redistricting, although the legislators took the more nuanced position that voters can still make decisions on the redistricting process though referenda – they just can’t completely cut out the legislature’s involvement.

This case revolves around the definition of “Legislature” in the Elections Clause.

The redistricting commission argued in its brief that the term “Legislature” does not mean only the state’s legislative body but “signifies the state-level lawmaking process that is closest to the People, and that has always been left to them to structure as they see fit.”

A second issue is whether the legislature has standing to file suit.  That is, did they suffer a concrete, recognizable injury? The redistricting commission argues that state legislators have no standing to challenge the voters of Arizona and the decision they made on the allocation of lawmaking authority.

Today, Clement told the Court that “this avowed effort to redelegate” the authority over redistricting “to an unelected and unaccountable commission is plainly repugnant to the Constitution’s vesting of that authority in the legislatures of the States.”

Justice Antonin Scalia wanted to know whether it would be constitutional if the legislature itself “established this commission?”  Clement said that would be an allowable “delegation of authority.”

The Obama administration filed an amicus brief in the case on the side of the redistricting commission and was given time this morning to present its arguments to the Court.  However, some of the justices seemed to find the administration’s arguments a bit hard to swallow.  For example, Assistant Solicitor General Eric Feigin claimed that the state legislature didn’t have standing to sue because nothing prevented the legislature from “passing a bill that would redistrict the state,” even though he acknowledged that such a law would not be enforceable. As Chief Justice John Roberts said, “So you want the legislature to pass a law that’s not enforceable and suggest they don’t have standing to challenge what the referendum has done in this case until they go through that process?”

In fact, Feigin went even further, claiming the legislature doesn’t have “an interest in the enforcement of the laws that they pass,” thus taking the astonishing position that the legislature would have no ability to ever appear in court to contest this referendum. Even Justice Sonia Sotomayor seemed surprised by Feigin’s answer, saying that didn’t the legislature “have an interest in the constitutional powers they have?” Justices Ruth Bader Ginsburg and Anthony Kennedy also were clearly concerned over the arguments being asserted by the Justice Department over standing.

Waxman asserted that Arizona defines its legislature to include “the People,” and thus the referendum process, and that the term “Legislature” in the Elections Clause cannot “ignore a State’s definition of its own legislature.” Justice Scalia interrupted Waxman and challenged him to give Scalia “one provision of the Constitution that uses the term ‘legislature’ that clearly was not meant to apply to the body of representatives of the people that makes the laws.” Waxman was unable to answer that question and Scalia admonished him that Scalia had looked through the Constitution and there wasn’t a single provision that “clearly” had the meaning Waxman was trying to subscribe to it.

Kennedy added that “history works very much against” Waxman’s argument on the definition of legislature, citing the 17th Amendment, which changed the Constitution’s original provision that senators were chosen by the legislature. As Kennedy pointed out, “there was no suggestion that this could be displaced” by a state prior to the 17th Amendment.

This is an important case given the move in some states to hand over redistricting authority to independent commissions.  The decision will answer the question, as Clement put it in his rebuttal at the end of the argument, whether “there is a fundamental difference between the legislature and the people.”