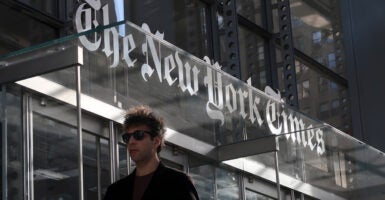 Miles Taylor, who wrote the 2018 New York Times op-ed “Anonymous” while part of President Donald Trump’s administration, didn’t even hold the agency chief of staff position at the time he wrote the op-ed. Pictured: A person walks past the front door of The New York Times headquarters Oct. 23, 2018, in New York City. (Photo: Gary Hershorn/Getty Images)

Journalists criticized The New York Times Wednesday for overhyping the unnamed author of “Anonymous”—Miles Taylor, the former chief of staff to a former secretary of the Department of Homeland Security.

Taylor, who wrote the 2018 New York Times op-ed “Anonymous” while part of President Donald Trump’s administration, didn’t even hold the agency chief of staff position at the time he wrote the op-ed.

The former DHS staffer revealed his identity Wednesday in a Medium post.

Donald Trump is a man without character. It’s why I wrote “A Warning”…and it’s why me & my colleagues have spoken out against him (in our own names) for months. It’s time for everyone to step out of the shadows. My statement: https://t.co/yuhTgZ4bkq

“I saw Donald Trump prove he is a man without character, and his personal defects have resulted in leadership failures so significant that they can be measured in lost American lives,” he wrote. “I witnessed Trump’s inability to do his job over the course of two-and-a-half years. Everyone saw it, though most were hesitant to speak up for fear of reprisals.”

The New York Times faced a wave of criticism Wednesday over its handling of Taylor’s op-ed.

really a lot of very poor editorial decisions made at NYT opinion in the last few years https://t.co/JoUBiPAAeX

“I also didn’t realize the definition of ‘senior administration official’ could be *this* expansive,” tweeted Axios’ Jonathan Swan, pointing out that Taylor wasn’t “even an agency chief of staff at the time the op-ed ran.”

Bloomberg News senior White House reporter Jennifer Jacobs retweeted Swan’s tweet with the caption: “A lot of this reaction from senior Trump aides who work very closely with the president. Some saying they barely knew Miles Taylor, and argue he wasn’t significant part of big decisions or meetings with Trump or [Vice President Mike] Pence.”

“There’s a legitimate role for anonymity in journalism but that op-ed embodied one of its worst uses, where you obscure the source of information primarily to make the source sound more authoritative than he really is,” Yglesias tweeted.

The anonymity in the original op-ed combined with these paragraphs is used to create the false impression that we are reading the thoughts of a cabinet officer with direct knowledge of these conversations, not a Schedule C rehashing press reports. pic.twitter.com/c4b1erqJWJ

“The editor in chief of the New York Times had to have known for years that his paper was misleading the public on that op ed,” tweeted the Washington Examiner’s Joe Simonson. “Absolutely nuts.”

“Probably one of the biggest pieces the paper ever published during the trump years and we find out days before the election,” he added.

The Wall Street Journal’s Michael Bender added: “I get it. But there are *plenty* of Trump White House staff, current and former, who repeatedly wanted to go on background as a ‘senior administration official,’ or wanted colleagues to be referred to that way, only to be told no dice [because] … they didn’t hold a senior job.”

Taylor, who left Trump’s administration in 2019 and is now a CNN contributor, endorsed 2020 presidential candidate Joe Biden for president in August and is a frequent and public critic of Trump.