The Trump Administration Is Countering the Spread of China’s Untrustworthy 5G Networks. USAID Is Leading the Charge. 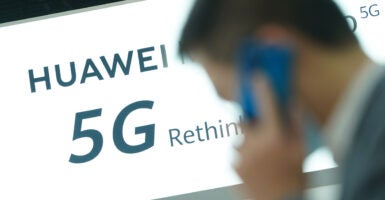 The Chinese government is seeking to dominate the global rollout of 5G technology through private Chinese entities, like Huawei, which essentially serve as an extension of the Chinese Communist Party’s intelligence apparatus. Pictured: A Huawei sign promotes 5G products in Berlin. (Photo: Sean Gallup/Getty Images)

Bonnie Glick is the deputy administrator of the United States Agency for International Development and a former executive at IBM.

In the Wild West, a major hindrance to economic development was the regular assault by bandits on trails and railways. Today, malign actors like the Chinese Communist Party threaten the digital superhighway that hosts trillions of dollars in global commerce and massive amounts of government and private data. The stakes could not be higher in the global struggle to secure that information.

Many countries are on the cusp of installing fifth-generation mobile technology, or 5G. People are hearing more about 5G, and what it promises to do in speeding up our mobile access to information and internet platforms is simply astounding.

If you’re using a recently released mobile phone, you will be impressed by what the new 5G systems will do, and how quickly they will process information. In many ways, we cannot even fathom what 5G will bring, but think beyond fully autonomous vehicles and remote surgeries. It’s a game-changer.

People all over the world will feel the impact in small but important ways.

Faster download speeds make it easier for a child in a rural Nigerian village to video chat with a teacher. More robust systems allow doctors in India to analyze X-rays faster. This can all happen if the technology is allowed to be inclusive, open, and secure.

Sadly, not everyone shares these goals.

The Chinese government is seeking to dominate the global rollout of 5G technology. Beijing is aggressively pushing nations to adopt its 5G offerings, which are anchored by entities like Huawei and ZTE—heavily subsidized tools of the Chinese Communist Party’s surveillance state.

To any nation that adopts Chinese technology, it is a digital Trojan horse. Such a country would be allowing Beijing access to all of its communications and data, including top-secret information kept by governments and financial information of its citizens.

If you believe that a nation’s control over its data is essential to its sovereignty, the Chinese effort to dominate 5G represents, in effect, a breach of national borders.

What’s more: The Chinese Communist Party’s distribution of this technology to developing nations could be a human rights catastrophe on a global scale. After all, some of the nations adopting China’s 5G technology may well do so precisely because it will give them the ability to monitor their own citizens to a frightening and unprecedented degree.

China would be exporting to the world’s most authoritarian dictators a tool of surveillance that even George Orwell could not imagine.

This is one of the many reasons President Donald Trump is leading a global campaign to stop the spread of untrusted network equipment around the world. And the U.S. Agency for International Development is at the leading edge of the effort to confront China’s nefarious intentions.

We do this work with confidence that we are on the right side of this struggle. Foreign assistance is critical to our national security, and a reflection of our nation’s core principles and values.

America’s use of smart power has always been a reflection of our values. And so we take seriously the opportunity of 5G to promote prosperity to lead to the positive social and economic outcomes that are the hallmarks of a healthy digital economy.

We see the potential and imperative of using technology, and we want nations to grasp it and thrive from it. Every day, we make the case to other nations that they are better selecting with technologies developed by trusted firms in the U.S. and allied countries.

This is part of what I call our national drive to on-shore, near-shore, and allied-shore manufacturing, production, and management of global networks.

In doing so, we are making the case for the American model for technological innovation. American technology is superior—and emerges from an organic and sometimes serendipitous process. That’s the path of development we champion and for which I am certain America will always be known.

The fact that Huawei’s 5G systems may be hamstrung by lack of access to American technology proves the point—and Trump is taking strong action to remind the Chinese Communist Party of that fact.

The world is taking notice. Increasingly, our friends realize that any bargain struck with the Chinese for 5G technology is, by definition, uneven and very likely unwise. They are hearing from us that they have choices—good choices. It is the Wild West no more. There’s a proper sheriff in town.