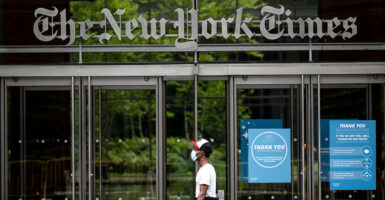 Nikole Hannah-Jones, the lead editor of the 1619 Project, is now stressing that her project to reframe history is not the same as “a history." Pictured: The New York Times building is seen on June 30 in New York City. (Photo: Johannes Eisele/AFP/Getty Images)

When The New York Times Magazine published the 1619 Project last year, supporters hailed this retelling of America’s founding as a “woke” counternarrative meant to correct the historical record.

Yet in recent weeks, Nikole Hannah-Jones, the lead editor, has stressed that her project to reframe history is not the same as “a history.” Clear enough?

Even Americans who haven’t read the 1619 Project, a series of written work on the legacy of slavery, know the project was launched with fanfare. And the rollout continues: A series of books are to follow, a podcast is available, and public schools are using the material. Lionsgate and Oprah Winfrey intend to adapt the project for film and TV.

For the 1619 editors to now say, “presume not that I am the thing I was” should make us suspicious of the project’s future. Shakespeare’s Hal said as much to his former drinking companion, Falstaff, in “Henry IV, Part 2,” and the audience can afford the presumption because we know his victory at Agincourt is coming in “Henry V.”

The next act, however, for the 1619 Project may be less promising. As the project’s creators spread it across more media and entertainment platforms, the Times, its partners at the Pulitzer Center, and Hannah-Jones have already said 1619 should be considered history.

For example, in an introduction to the 1619 Project school curriculum, the Pulitzer Center says the project aims to “reframe their [students’] understanding of U.S. history by considering 1619 as the start of this nation’s story.” Then: “For generations we have not been adequately taught this history.” Pause to consider the repeated use of the word.

For her part, Hannah-Jones has said in at least one interview, “But I didn’t want it to be a history.”

Later in this same interview, she says: “[If] we were going to undertake this project to try to tell this 400-year sweep of history”—again, note the term—“of people who have been so intensely marginalized both in society and in popular media, that the pressure to do it justice was very high.”

Hannah-Jones failed to catch herself again in another interview, saying: “I think it’s really important that we get a more accurate history, that we teach children to challenge the given narrative to question, to have an understanding of the American story that is more inclusive and that is more realistic.”

History or not, a group of award-winning historians, including Allen C. Guelzo, senior research scholar in the Council of the Humanities at Princeton, began citing inaccuracies in the project shortly after its release.

In response to one letter to the editor in the Times from a group of professors, the Times continued to muddy the debate over history (but refused to make substantive corrections): “Though we may not be historians, we take seriously the responsibility of accurately presenting history to readers.”

The Times offered a modest correction in March to one of the project’s assertions, but this followed still more public criticism from a professor who reviewed the project prior to release and had her key correction ignored, all of which she explained in an essay for Politico.

Writing in The Atlantic, Princeton professor Sean Wilentz, author of “No Property in Man: Slavery and Antislavery at the Nation’s Founding,” says that he and historians he collaborated with “wholeheartedly support the stated goal to educate widely on slavery and its long-term consequences.” But “no matter how the history is interpreted and related, [this goal] cannot be forwarded through falsehoods, distortions, and significant omissions.”

Originally published by the Idaho Statesman