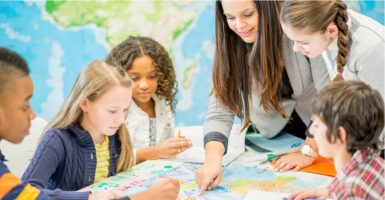 The Heritage Foundation commissioned a survey to gauge the extent of Americans’ approval of the 1619 Project. The survey results showed a disparity between the opinions of parents and those of school board members over whether it should be taught in classrooms. (Photo: FatCamera/Getty Images)

A recent survey conducted for The Heritage Foundation found that some parents and many school board members disagree with the historical perspective advanced by The New York Times’ 1619 Project.

The project promotes the notions that the Revolutionary War was fought to preserve slavery and that America’s founding date should be 1619, the year the first slave ship arrived in America, rather than 1776.

Supporters of the 1619 Project continue to incorporate it into school civics curriculums across the country, even after The New York Times issued a major correction to the project’s introductory essay by Nikole Hannah-Jones, its creator.

Pulitzer Prize-winning historians “have said that the project has weak scholarly support,” Jonathan Butcher, senior policy analyst at The Heritage Foundation’s Center for Education Policy, said at a July 9 webinar event on civics education and the 1619 Project.

The Heritage Foundation commissioned a survey, conducted by Braun Research Inc., to gauge the extent of Americans’ approval of the project. Parents and school board members from across the country were asked about the way American history should be taught in school.

The survey, conducted of 1,001 parents and 566 school board members, revealed that much of the nation is divided in its opinions of the 1619 Project.

When asked whether 1776 should continue to be taught as the year of the country’s founding, rather than 1619, 59.1% of parents and 72.6% of school board members answered the year the Declaration of Independence was signed should remain as America’s founding date.

Almost 50% of parents and 70% of school board members said they do not want their children’s school to use “instructional material based on the idea that slavery is the ‘center of our national narrative.’”

The study consistently revealed a difference in opinion between parents and school board members. Parents were found to hold a more “progressive” view of American history and to be more approving of the 1619 Project.

Lindsey Burke, director of The Heritage Foundation’s Center for Education Policy, said the difference in response between parents and school board members likely can be attributed to a number of factors.

The disparity of opinion between parents and school board members was also in evidence when asked whether they thought a “curriculum for schoolchildren should promote the view that our founding ideals of liberty and equality were false when they were written by the Founders.” About 5 of every 10 parents said yes, while only 3 of every 10 school board members answered in the affirmative.

Just over 57% of parents and nearly 65% of school board members answered “no” when asked whether schools “should reframe American history so that children will learn that the United States has been tainted by slavery and racism.”

The attempt of the 1619 Project to reframe history is not a new phenomenon, said Mike Gonzalez, Heritage Foundation senior fellow with the Center for Foreign Policy and author of the new book “The Plot to Change America,” at the webinar, discussing the results of the survey.

“The mayhem we are seeing in the streets today, the toppling of statues of Founders, and even abolitionists, a rejection of America’s founding, of its institutions, its history, its economic system, it’s part of an effort that has been unfurling for decades,” Gonzalez said.

Throughout history, various movements have arisen and attempted to change the historical narrative in order to further a political agenda, he explained, adding:

I do have hope in my heart. I do see 2020 as … the year when the American people finally begin to realize that decades of teaching the children to hate their country has been a colossal mistake.