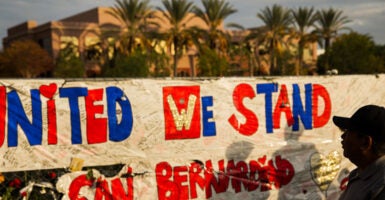 A California man was sentenced to 20 years in federal prison for conspiring to commit terror attacks and for providing assault rifles used in the 2015 attack in San Bernardino, California, that left 14 dead, the Department of Justice announced.

Enrique Marquez Jr., 28, pleaded guilty in 2017 to conspiring to provide material support and other resources to terrorists, according to the Justice Department’s announcement Friday. As part of his plea agreement, Marquez also admitted to conspiring with Syed Rizwan Farook to attack commuter traffic on the 91 Freeway and the Riverside Community College campus in 2011 and 2012.

Farook and his wife used the two assault rifles that Marquez “straw” bought for them to attack the San Bernardino Inland Regional Center three years after the purchase, prosecutors said.

Marquez said Farook paid for the firearms and that they also discussed using radio-controlled improvised explosive devices, or IEDs, according to the Justice Department. Marquez said he purchased a container of smokeless powder and Christmas tree light bulbs to make the IEDs.

Prosecutors argued in a memorandum filed last week that Marquez “was a full, willing, and motivated participant of the conspiracy who not only provided the agreement necessary for the conspiracy to attack RCC and SR-91, but also co-designed the attacks with Farook.”

Marquez “purchased the two firearms and ammunition to facilitate the attacks, researched bomb making and obtained explosive powder and other bomb-making materials, and visited RCC and SR-91 to sketch out how he and Farook would attack the two locations to maximize casualties,” the memorandum says.

U.S. District Judge Jesus Bernal denied Marquez’s request that he be sentenced to five years, according to the Justice Department. Prosecutors said the request was an effort to “downplay the seriousness of his actions, and skirt that his actions contributed to the mass killing and injuring of innocent people in San Bernardino just a few years later.”

After his arrest, Marquez has remained in custody since his initial court appearance Dec. 17, 2015, according to the Justice Department.