See How Your Senators Voted on 4 Gun Control Amendments 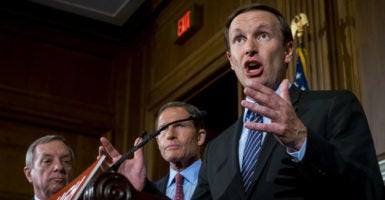 The Senate shot down a series of gun control measures Monday, all brought up for debate after the worst terrorist attack on American soil since 9/11.

The four gun control bills—two proposed by Republicans and two by Democrats—were torpedoed after the sides were unable to come to an agreement.

The votes came less than a week after Sen. Chris Murphy, D-Conn., filibustered for more than 14 hours to support a universal background check system to stop terrorists from acquiring guns.

After learning the FBI had twice investigated Islamist-inspired mass murderer Omar Mateen on suspicion of terrorist sympathies, Democrats and Republicans largely agreed that those under investigation for terrorist activity should be barred from purchasing weapons. Mateen killed 49 persons and wounded 53 more in his June 12 shooting rampage at a gay nightclub in Orlando.

“No one wants terrorists to be able to buy guns or explosives. No one,” Majority Leader Mitch McConnell, R-Ky., said.

But senators could not come together on specifics to address the problem, with each side accusing the other of using the votes for base political ends.

Senate Republicans rejected two Democratic proposals that would have barred firearm sales to people on the FBI’s terrorist watch list and required every gun purchaser to undergo a background check, arguing that the measures too dramatically expanded the federal government’s power.

“The Democratic alternative would not ensure due process, protect our constitutional rights, or require the government to periodically review its procedures to ensure it’s investigating the right people,” McConnell said.

Democrats, in turn, shot down Republican alternatives that would have required the government to prove probable cause within three days to block a gun sale to a suspected terrorist and increase funding for background checks. They argued the proposals were insufficient half measures only intended to help Republicans who receive donations from gun groups to save face.

“It doesn’t matter how sensible the legislation or how terrible the tragedy,” said Minority Leader Harry Reid, D-Nev., “Republicans are beholden to the National Rifle Association, the NRA, and not the people that elect them to come here and represent them.”

The votes of 60 senators were needed to end debate and proceed to a final vote on each measure.

The Republican proposals each received 53 votes. A total of 47 senators voted for the terrorist watch list amendment proposed by Sen. Dianne Feinstein, D-Calif., and 44 voted for the expanded background checks proposed by Murphy.

Sen. Mark Kirk, R-Ill., was the only Republican to vote for both Democratic proposals. Sens. Joe Manchin, D-W.Va., Heidi Heitkamp, D-N.D., Joe Donnelly, D-Ind., and Jon Tester, D-Mont., voted against one or both.

Some hope for a compromise amendment remained.

Sens. Kelly Ayotte, R-N.H., and Susan Collins, R-Maine, said they would present a measure that, while similar to Feinstein’s bill, would restrict gun purchases to a smaller group than the FBI’s far-reaching terrorist watch list.

“There is a solution here, and I’m committed to finding it. But to find that solution, we have to come together instead of having competing proposals that have already mostly failed in this chamber when we took these votes back in December,” Ayotte said. “Let’s put aside the gamesmanship and come together to get a proposal that will be effective and get a result for the American people.”

Here’s how the Senate voted on the first Republican-sponsored gun control measure: Here’s how the Senate voted on the second Republican-sponsored gun control amendment: Here’s how the Senate voted on the first Democrat-sponsored gun control measure: Here’s how the Senate voted on the second Democrat-sponsored gun control amendment: