A Counterbalance to the False Narratives About Gun Ownership 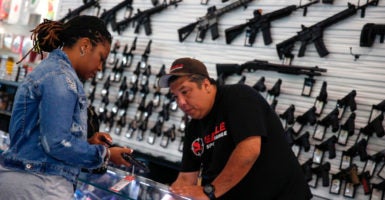 Kiley Russell speaks to salesman Jason Zielinski as she gets information about buying a gun before taking her concealed carry certification test at the Eagle Sports gun range in Oak Forest, Illinois, on July 16, 2017. (Photo: Jim Young/AFP/Getty Images)

The data is in: Americans are flocking to gun stores in unprecedented numbers during the COVID-19 pandemic.

The spike has left many gun control advocates struggling to find a motive other than pure, irrational panic. After all, the common narrative goes, “the good guy with a gun” is a myth and it’s very rare that any law-abiding Americans have to defend themselves at gunpoint.

Enter The Heritage Foundation’s new Defensive Gun Use Database to help make sense of why so many Americans are now racing to exercise their Second Amendment rights, often for the first time.

Our interactive map allows users to see how, even during normal times, law-abiding gun owners play an integral part in protecting individual rights and promoting public safety. At the touch of a button, the details of hundreds of recent defensive gun uses from all across the country are instantly available.

The database, of course, is nowhere near comprehensive. The hundreds of stories from the last 16 months represent just a fraction of the defensive gun uses that actually occurred.

As the Centers for Disease Control and Prevention concluded in 2013, almost all major studies on the issue have found that Americans use their firearms for self-defense somewhere between 500,000 and 3 million times a year.

The database includes only those instances that could be independently verified through public sources, and where sufficient evidence exists to believe the gun owner acted both lawfully and responsibly.

There’s good reason to believe that most defensive gun uses are never reported to law enforcement, much less picked up by local media or highlighted in national news stories.

While my inner lawyer knows that a gun owner should file a report every single time he or she has to draw a weapon, regardless of whether shots are fired, the reality is that many people see such instances as complete non-events, unworthy of getting the police involved.

Worse, gun owners may have a very real fear that calling law enforcement opens the doors for too many legal technicalities that will result in the gun owner—not the criminal—being arrested.

Still, while the Defensive Gun Use Database merely scratches the surface of the importance of the Second Amendment in American society, it provides a much-needed counterbalance to the many false narratives about gun ownership.

Most importantly, the database gives hard evidence to support what Americans instinctively know: The government cannot always be there to protect your individual rights and liberties from criminals.

It wasn’t the government that stopped a would-be mass shooter at a Tulsa, Oklahoma, shopping center on March 27. It was an unnamed concealed-carry permit holder who intervened, ending the threat before any innocent bystanders were injured.

It wasn’t the government that secured the rights of a Deltona, Florida, woman and her three children on March 31, when a crazed man smashed through her window and threatened their lives. She relied on the Second Amendment, and nothing more.

It wasn’t the government that saved 73-year-old Curtis Roy on April 11, when an intruder put him in a chokehold inside his Fredericksburg, Texas, home. It was his fiancee, armed with a handgun, who came to his rescue.

It wasn’t the government that defended a Lexington, Kentucky, woman from her ex-boyfriend when he broke into her house on April 24 and started shooting. It was a roommate with a gun, who shot and killed the violent man long before police would have arrived.

Can anyone really doubt how much more vital such a right is during national emergencies, when law enforcement resources are strained and response times for police assistance are prolonged?

When states or local authorities attempt to shut down gun stores as “nonessential,” leaving citizens with no legal way to acquire firearms, they relegate the Second Amendment to something far less than a fundamental constitutional right.

And as our Defensive Gun Use Database shows, when lives and liberties are on the line, few things are more essential than the right to keep and bear arms.