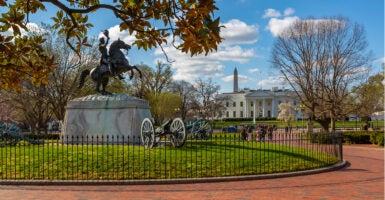 The National Park Service has approved one permit for a prayer vigil in the nation’s capital next week, which includes Election Day, and is reviewing nine other demonstration requests, a local CBS affiliate reported.

The requests include religious gatherings, patriotic events, and free speech demonstrations “against the election results,” WUSA-TV (Channel 9) reported. The National Park Service issued a permit to Edwina Davis for a prayer vigil near a public park, Lafayette Square, that is expected to draw 100 participants.

The permit for the largest gathering was submitted by ShutDownDC for 10,000 participants, WUSA reported. The request is for a “week of action to ensure free and fair elections” from Nov. 1 until Nov. 9 with locations including the Washington Monument, Constitutional Gardens, and Lafayette Square. The request does not include specific days for each location.

“This November, we’re coming together to take direct action to defend democracy and ensure that every American’s vote counts,” ShutDownDC organizer Hope Neyer said, according to the CBS affiliate.

“We’re going to be ready then to take action if something comes up, where it seems to us that the election is being contested, if [President Donald] Trump is refusing to cede power, or if something is going down that is offensive to the American people’s sense of justice,” Neyer said.

Protests have been ongoing in DC since June, but get ready for even more demonstrations as Election Day nears.https://t.co/lO8PzaTCIc

A group called Women for a Great America requested a weeklong permit to “pray for a peaceful election [and] pray for President Trump” around Lafayette Square from Nov. 1 until Nov. 7, WUSA reported. The event is expected to draw 250 participants.

An organization called the ETI (Extraterrestrial Intelligence) Disclosure Party of Florida requested a permit to host a crowd of 1,000 in a “disclosure rally on All Souls Day 2020,” Nov. 2, “to peacefully protest the state secrecy regarding UFOs and extraterrestrial life,” the station reported.

DC Action Lab submitted a request for a permit to hold a “free speech demonstration against the election results,” with an expected attendance of 1,000 from Nov. 2 through Nov. 10 in seven locations including Lafayette Square, Freedom Plaza, and Farragut Square, WUSA reported.

The National Park Service did not respond to The Daily Caller News Foundation’s request for comment.