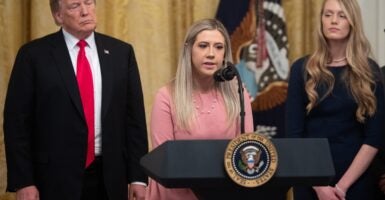 National Free Speech Week runs through Oct. 25, and nowhere is free speech under more frequent assault than on the nation's college campuses. Pictured: President Donald Trump stands alongside Kaitlyn Mullen (center), a student at the University of Nebraska at Lincoln, and Ellen Wittman, then-president of Students for Life at Miami University of Ohio, at the White House on March 21, 2019, prior to signing an executive order to protect free speech on college campuses. Wittman co-authored the accompanying article. (Photo: Saul Loeb/Agence France-Presse/Getty Images)

Ellie Wittman is a media relations specialist for Alliance Defending Freedom and a former president of Students for Life at Miami University-Hamilton in Ohio.

Bernadette Tasy is a media relations specialist for Alliance Defending Freedom and a former president of Fresno State Students for Life.

As Free Speech Week concludes, Americans nationwide are reminded that public university campuses provide a unique environment for students to engage in the marketplace of ideas while pursuing higher education.

Sadly, however, many public officials have forgotten their own role in encouraging free speech on campus, and some colleges have even received a free pass after violating students’ rights, which has set the stage for an upcoming U.S. Supreme Court case.

As college students, knowing that the First Amendment protected our right to do so, we were determined to engage in conversations on campus by sharing a message that others might otherwise never hear.

Unfortunately, our public universities’ officials abandoned their posts as protectors of the Constitution and instead attempted to deprive us of our opportunities to speak, simply because they didn’t agree with us.

In the spring of 2017, Fresno State Students for Life received permission from the university to chalk pro-life messages on the campus sidewalks. Those messages included “Choose Life,” “Support Pregnant and Parenting Students,” and “Heart beats 21 days after conception.”

Greg Thatcher, a public health professor at Fresno State, did not approve of those messages and recruited several students from his 8 a.m. class to help him remove them.

On video, he proudly announced that “college campuses are not free speech areas” and that “free speech” included his right to erase and deface the messages, even though the university had approved our chalking.

Thatcher’s actions didn’t just silence pro-life voices that day. He told college students that censorship is “free speech,” that stifling other viewpoints is acceptable, and that universities are places for only a select few ideas, not a marketplace for a multitude of them.

In other words, Thatcher was held accountable for his actions.

A similar incident occurred in October 2017 at Miami University-Hamilton in Ohio, where the Students for Life chapter planned to set up a pro-life “Cemetery of the Innocents” display commemorating the thousands of lives lost to abortion every day.

Shortly before the display was to begin, the university administration informed the group that it would be required to post “trigger warning” signs across campus because the content was “polarizing.”

By imposing such restrictions only on the pro-life club, the university discriminated against one viewpoint and discouraged the exchange of different ideas on campus. Because the display was not in line with the orthodoxy of the university, it was censored.

Alliance Defending Freedom sued the school on behalf of the Students for Life group, and the university soon changed its policies to treat all viewpoints fairly. Again, justice was served.

But the justice we received in the Fresno State and Miami University cases has not been provided to the college student whose lawsuit is now before the Supreme Court.

Officials at Georgia Gwinnett College told Chike Uzuegbunam where and when he could share his Christian faith with fellow students, restricting his speech to two tiny “speech zones” that take up less than 0.0015% of the campus. That’s equivalent to the size of an 8-1/2-by-11-inch sheet of paper on a football field. Uzuegbunam complied with their demands, and yet, they still censored him, because they didn’t like what he said.

The college later changed its unconstitutional speech policies, but it continues to dodge responsibility for violating Uzuegbunam’s fundamental rights. That’s why his case will now be heard at the highest court in the land.

For example, Alliance Defending Freedom, which is litigating Uzuegbunam’s case, has filed seven First Amendment lawsuits against the University of Wisconsin, two lawsuits against Georgia Tech, and repeated free speech cases against several other colleges and universities.

Courts need to hold public officials accountable when they violate the very rights they are entrusted with upholding.

We don’t want to see more students experience the censorship we endured.

The courts protected our rights, and we hope that Uzuegbunam’s case will deliver a similar result; namely, a definitive ruling to protect the First Amendment rights of all students for generations to come.