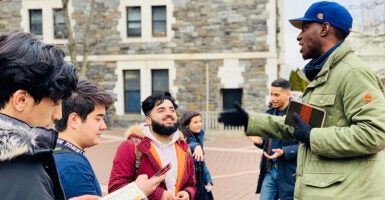 Chike Uzuegbunam, right, is the plaintiff in a case against Georgia Gwinnett College that is heading to the Supreme Court. (Photo: Alliance Defending Freedom)

The Supreme Court has agreed to hear a case involving two former Georgia college students who were prevented from sharing their faith on their school campus.

“The bottom line is this: Government officials must be held responsible for enacting and enforcing policies that trample students’ constitutionally protected freedoms,” John Bursch, senior counsel and vice president of appellate advocacy with Alliance Defending Freedom, said Friday on a press conference call about the Supreme Court’s announcement Thursday that it would take up the case.

In a case that dates back to July 2016, Chike Uzuegbunam was a student at Georgia Gwinnett College who tried to share his Christian faith with fellow students. But “college officials quickly stopped him because he had not reserved one of two tiny zones where free expression was allowed without a permit—zones that together made up only a minuscule 0.0015% of campus,” according to a press release from the Scottsdale, Arizona-based Alliance Defending Freedom, which represents him.

After that, Uzuegbunam tried to reserve a free-speech zone and a permit for speech from the Lawrenceville, Georgia, college, and he again was told to stop by the college because someone complained it made them “uncomfortable.”

Because of the actions of the school, Uzuegbunam stopped his witnessing activities. A fellow student, Joseph Bradford, also chose not to speak about his faith due to how Uzuegbunam’s situation was handled.

“All I wanted to do was to share with other students the faith that has changed my life,” Uzuegbunam said on the press call.

“I was a junior at Georgia Gwinnett College and had some tracts that explained the gospel of Jesus Christ,” he said, adding:

The college officials stopped me and said I couldn’t distribute literature because I wasn’t in one of the two tiny speech zones the college mandated that students use to speak with other students.

According to the Alliance Defending Freedom, two federal courts looked the other way and chose not to examine whether or not the college infringed on the First Amendment rights of the students “because officials modified their unconstitutional speech policies after the case was filed.”

Bursch said that “the college changed course and fixed its unconstitutional policy, which was a welcome move, but the college never accepted responsibility for or did anything to address the way it repeatedly violated its students’ constitutional rights.”

If not dealt with, he said, a situation like Uzuegbunam’s is bound to happen again.

“If they get off without consequences, they or others can simply do it again,” Bursch said. “Neither the district court [nor] the appeals court held Gwinnett college officials accountable for how they repeatedly mistreated, censored, and intimidated the two students involved in this case.”

In its press release, the Alliance Defending Freedom points out that “the U.S. Court of Appeals for the 11th Circuit is the only federal appellate court that leaves government officials—in this case, those at a public college—unaccountable for violating citizens’ constitutionally protected freedoms when those officials later change their policies during litigation.”

In March, Jews, atheists, Catholics, and Muslims filed friend of the court briefs in Uzuegbunam v. Preczewski with the Supreme Court in support of the two former students at Georgia Gwinnett College, located about 32 miles northeast of Atlanta.

“We need to ensure that the wrong done to our clients is righted—something that both the district court and the 11th Circuit failed to do,” Tyson Langhofer, Alliance Defending Freedom senior counsel and director of the ADF Center for Academic Freedom, said in a statement. “It’s our hope the Supreme Court will make sure that this denial of justice doesn’t occur to anyone else.”