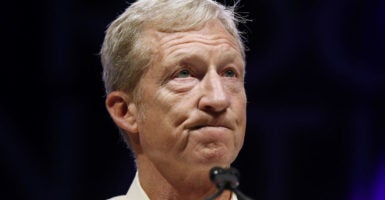 Not only did a Democratic “blue wave” fail to materialize on Tuesday night, the “green wave” of major global warming and energy-related ballot measures largely failed to get voter approval, as well.

Voters in Arizona, Colorado, and Washington rejected measures aimed at fighting global warming, despite two of those states being in Democratic hands.

The “Green New Deal” pundits gushed over in Washington state went down in flames, with voters overwhelmingly rejecting a state ballot measure to tax carbon dioxide emissions, despite its support from Democratic Gov. Jay Inslee.

Washingtonians voted against the carbon tax initiative 56 percent to 43 percent, according to state election officials.

“The voters have spoken,” Tom Pyle, president of the free-market American Energy Alliance, said in an emailed statement.

“It’s time to listen to them and focus on policies that expand the availability, affordability, and reliability of energy, rather than on policies that makes energy more scarce, more expensive, and less reliable,” said Pyle, a former Trump transition team leader opposed to carbon taxes.

“Democrats did not quite get the blue wave they wanted, but it was even worse for environmentalists,” The New Republic’s Emily Atkin wrote on Wednesday, before blaming, in part, spending by energy producers. “There was no green wave whatsoever.”

However, Washington voters rejected a similar carbon tax measure in 2016, and Inslee was forced to admit defeat earlier this year trying to pass a carbon tax through the state Legislature.

Utility groups, including the owner of the state’s largest utility, spent nearly $31 million opposing Steyer’s effort. Nearly 70 percent of voters rejected the ballot measure, with only about 30 percent supporting it.

Steyer, however, was successful in getting Nevada voters to support a similar measure that was on the ballot in Arizona. Nevadans voted nearly 59 percent to 41 percent to increase the state’s green energy mandate to 50 percent by 2030.

NextGen pumped more than $10 million into the ballot campaign, but there was no group registered opposing the ballot—the group, the Coalition of Energy Users, did work against the green mandate increase, but its spending was not registered on Ballotpedia.

Environmentalists also saw voters overwhelmingly reject a measure that would have effectively banned new hydraulic fracturing operations in most of the state. Voters rejected the measure nearly 57 percent to 43 percent.

In that campaign, the oil and gas industry led opposition forces in spending more than $30 million to defeat the anti-fracking initiative, which would have required a 2,500-foot buffer between drilling and “vulnerable” areas.

Environmentalists only spent about $1.2 million in support of the anti-fracking measure, but the spending failure could stem from the fact Democrats were divided on the issue. Prominent Democrats, including former Interior Secretary Ken Salazar and former Gov. Bill Ritter, opposed the de facto fracking ban.

“Proposition 112 would have hurt more than just the natural gas and oil industry, as seventy-seven percent of the 43,000 jobs it would have eliminated in year one would have come from outside the energy sector,” said Colorado Petroleum Council Executive Director Tracee Bentley in a statement.