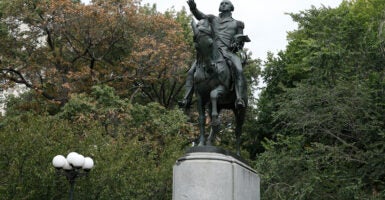 Monuments like this statue of George Washington seen Oct. 7 towering over Union Square Park in New York City could be "contextualized" with explanatory placards under a $250 million project announced by the Mellon Foundation. (Photo: John Lamparski/Getty Images)

One of America’s largest philanthropic organizations, the Andrew W. Mellon Foundation,  has announced a commitment to invest $250 million in what it calls the “reimagining” of public spaces and monuments across the country.

The Mellon Foundation’s Monuments Project, it announced earlier this month, will support efforts to reshape and “recontextualize” America’s public spaces to provide a “more complete” historical account of the American experience.

The New York City-based Mellon Foundation describes itself “as the largest supporter of the arts and humanities in the U.S.”

The project says it seeks to expand the number of stories included in the national narrative to identify those who typically have been denied “historical recognition” or otherwise were marginalized.

Mellon launched the effort amid protests and vandalism by Black Lives Matter activists and others, largely on the left, targeting for the destruction or removal of statues of Confederate leaders, Christopher Columbus, and other historical figures.

The project arrives at a time of national reckoning on issues of race and the country’s founding. Monuments, memorials, and other commemorative spaces are considered tangible representations of America’s founding and hence, some say, are intertwined with the social justice issues of today.

But some experts express concern over recent efforts to “revisit” the country’s history.

“Efforts to ‘recalibrate’ the meaning of the American story usually amount to a sloppy and dishonest revisionism,” said Joseph Loconte, a historian and director of the B. Kenneth Simon Center for American Studies at The Heritage Foundation, adding:

In evaluating the nation’s monuments, we can avoid valorizing oppression without denigrating the remarkable achievements of the patriots who built and sustained our democracy. But the progressive left, with its morally debased view of our nation’s history, is not up to the task.

Whether the left is up to the task or not, the long-standing debate over statues—particularly those of controversial Confederate figures such as Jefferson Davis and Robert E. Lee—has spawned division and discord in a nation already rattled by the COVID-19 pandemic and the ongoing, often violent protests that followed the death of George Floyd while in Minneapolis police custody in late May.

The campaign to “reconceptualize” historical monuments is fueled by the changing national discourse over statues and a growing call for imagery associated with slavery and colonialism to be removed.

According to a Quinnipiac University Poll survey from this summer, the majority of Americans support removal of Confederate statues across the country by a margin of 52% to 44%. In August 2017, 39% of voters said they supported their removal.