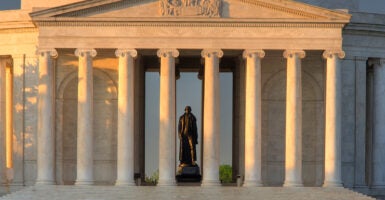 The nation’s monuments are under fire from the progressive left. A new report commissioned by D.C. Mayor Muriel Bowser recommends that the federal government “remove, relocate, or contextualize” the Washington Monument, the Jefferson Memorial, and six other statues and monuments.

Jarrett Stepman, a contributor to The Daily Signal and author of “The War on History: The Conspiracy to Rewrite America’s Past,” joins the podcast to discuss the report from the DCFACES Working Group and explain the intrinsic threat that cancel culture poses to American history.

To read the working group’s report to the mayor, click here. And for more analysis of the report, read the commentary for The Daily Signal by Joseph Loconte, director of the B. Kenneth Simon Center for American Studies at The Heritage Foundation, headlined “The Mayor, the Monuments, and the Mayhem.“